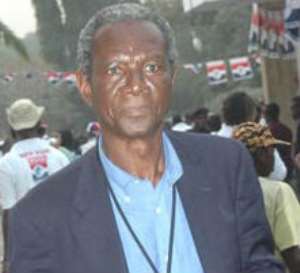 I have just read on Ghanaweb.com, a published statement attributed to the veteran politician and investment consultant, Mr. Kwame Pianim. His statement is published under the title, “NPP displayed intellectual and mental laziness in election 2012”. This statement is found under the politics column of Monday, 25 February 2013 on the electronic media.

Among the many seeming preposterous statements he made, he said “when the results of an election are announced, we should be ready to accept the results no matter how bitter... the interests of individual members and those of the party sometimes differ”

Let me crucify this old man who appears to be disgracing his old age. Normally, old age is an indication of wisdom but as there is always an exception to accepted norms, the old age of Mr. Pianim is pure stupidity as adduced from his pronouncements. His grey hair, unlike mine, is as well not an indication of wisdom.

How can he make those scandalous statements as published if he were wise and intelligent as he claims? If election results are fraudulent as the one Nana Akuffo-Addo and Co. is contesting, how rational is his advice to the citizens of Ghana to accept it for the truth? Why does the Constitution advise that if one perceives the results of an election to be false, the person can take it to court? Is he single-handedly telling Ghanaians that he is wiser than the authors of the Constitution?

How does Mr. Kwame Pianim interpret the following in terms of whether or not the election 2012 was free and fair?

1.The inability of the Electoral Commissioner, Dr. Kwadwo Afari-Gyan, to explain the 241,524 names on the voter register purported to be Ghanaians working in various Ghana foreign missions, and students on Ghana government scholarships?

2. The raiding of the NPP headquarters by unknown policemen alleged to be acting on tip off that the NPP were stockpiling “weapons of mass destruction” in the premises?

3. The raiding of the office of Lawyer Gloria Akuffo, upon discovering she has been enrolled as one of the lead Counsels for Nana Akuffo-Addo, Dr. Bawumia and Jake Obetsebi-Lamptey?

4. The raiding of an Electoral Commission's office within the District Headquarters office in Atimpoku in the Asuogyaman district in the Eastern region on 30 December 2012. A laptop and a pen drive containing election information were stolen by the raiders.

5. The missing of four biometric verification machines from the Amenfi East Constituency electoral collation centre. The defeated NPP parliamentary candidate had alleged irregularities and had already taken the winning NDC candidate to a local court?

6. The recent incident in Savelugu in the Northern region where two Electoral Commission officers were arrested for attempting to tamper and tampering with election 2012 “pink” sheets?

7. The breaking into of the NPP office in the Kwabre Constituency in the Ashanti region where all pink sheets and vital documents relating to election 2012 were made away with by the raiders?

Who are causing all these raids and thefts and what are their ulterior motives behind such horrible acts? Can Kwame Pianim answer me? He should not disgrace himself by making such insane utterances unworthy of an old man spotting grey hair.

Do we continue to sit on the fence while our leaders commit criminal electoral crimes with impunity? I do not think this old man going by the name Kwame Pianim has the interest of Ghana and Ghanaians at heart. Has he realised from my hurried response how unintelligent he is? He lacks common sense, I pray he becomes commonsensical around matters of electoral fraud and subsequent court cases next time he opens his mouth to offer his views on such topics and issues.

The author has 2089 publications published on Modern Ghana.