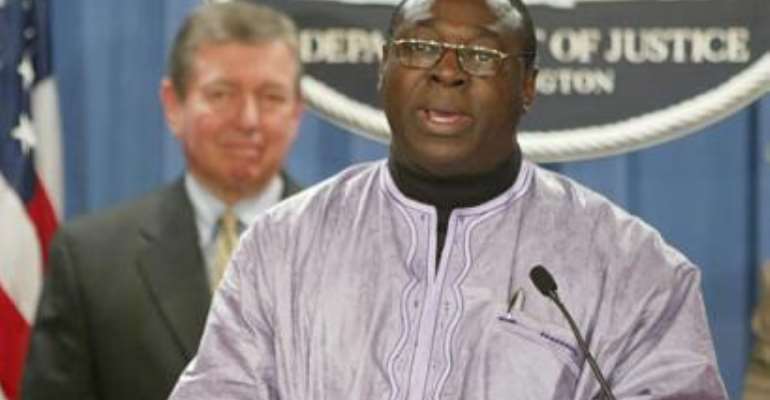 The seven-week sweep involved police from Ghana to Southern California and uncovered 125,000 victims who had lost more than $100 million, he told a news conference.

Authorities in Ghana helped track down suspects and recover millions of dollars in allegedly ill-gotten gains.

The deputy Inspector General of the Ghana Police Department Patrick Acheampong, announced Ghana's results of 'Operation Cyber Sweep' an international operation to crack down on internet fraud and cyber crime in the US.

"The information superhighway should be a conduit for communication, information and commerce, not an expressway for crime," Ashcroft said.

Those arrested stand charged with a variety of crimes that highlight the innumerable scams and criminal acts that now take place online.

Many are accused of selling stolen or nonexistent goods online, a leading cybercrime category. Suspects fenced stolen goods through online auction sites like eBay, set up phony escrow services to handle payments and touted fraudulent investment clubs through slick Web sites, according to a summary of cases the Department of Justice provided.

It said one California man continued to send online death threats to a Canadian who he thought was sending him "spam" e-mail, even after authorities asked him to stop.

U.S. Secret Service agents worked with foreign law enforcers to track down suspects who operated across international borders, leading to the arrest of a Romanian man who they said bilked some $500,000 from online auction participants.

Authorities in Ghana and Nigeria also helped track down suspects and recover millions of dollars in allegedly ill-gotten gains.

Federal agents said they had not yet found the perpetrators of the Blaster worm and SoBig e-mail virus that disabled millions of computers this summer, but had gained some valuable leads, thanks to a reward program set up by Microsoft.

A similar cybercrime sweep in the first half of the year led to 135 arrests. PIC: Deputy Inspector General of the Ghana Police Department Patrick Acheampong, right, and Attorney General John Ashcroft , left, speak Thursday, Nov. 20, 2003, at a news conference announcing the results of 'Operation Cyber Sweep' an international operation to crack down on internet fraud and cyber crime. (AP Photo/Ron Edmonds)