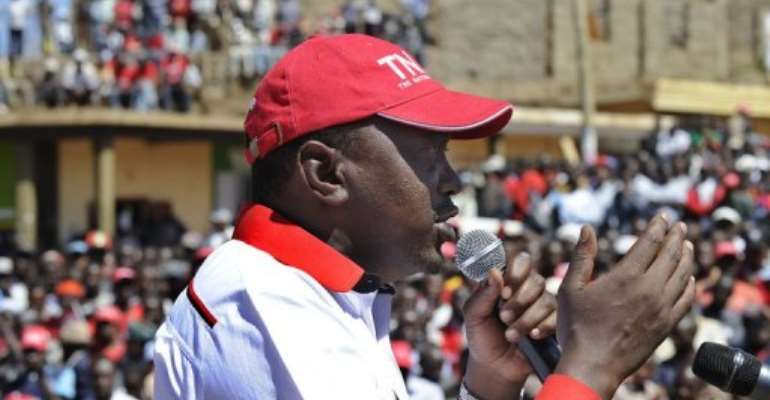 NAIROBI, Kenya (AFP) - If Kenya's presidential hopeful Uhuru Kenyatta wins March 4 elections, his first foreign trip along with the vice-president could be to The Hague to face trial for crimes against humanity.

For east Africa's economic powerhouse, the issue of a looming International Criminal Court (ICC) trial for Kenyatta has sparked fear of economic and diplomatic consequences should he win and fail to comply, analysts warn.

It raises the prospect that Kenya -- a regional diplomatic hub, popular tourist destination and with a growing economy buoyed by foreign investment -- could follow the path of pariah state Sudan, the only other country to elect a president indicted by the ICC.

The United States' top diplomat for Africa Johnnie Carson earlier this month warned Kenyans that "choices have consequences", in an apparent caution over the possible victory of Kenyatta.

"We live in an interconnected world and people should be thoughtful about the impact their choices have," he said, without naming any names.

The ICC issue "raises enormously the stakes of the presidential contest", the International Crisis Group think tank warned in a recent report.

Kenyatta and running mate William Ruto -- a fellow ICC indictee -- "in particular have challenged the ICC proceedings as politically motivated, and used them to rally their respective ethnic communities' support," the ICG added.

Their trials for their alleged role in orchestrating post-election violence five years ago in which over 1,100 people died are due to open on April 10 and 11, potentially clashing with a widely expected second round run off vote.

In terms of clear policy, little of real substance divides the top candidates. Kenya's election races have a long past of ethnic campaigning, as well as violence.

That has made many concerned that voters will use the election as a referendum on the ICC.

"The people of Kenya -- and they alone -- have the power and the mandate to determine the leadership of this great country," Kenyatta said after high court judges effectively cleared the way for him to run for office earlier this month.

Civil society groups have sought a ruling as to whether Kenyatta and Ruto should be allowed to stand for office due to the looming ICC trial. The high court finally ruled it lacked jurisdiction to make a decision.

The case illustrated how the ICC has divided domestic opinion: some believing that Kenyans alone should judge Kenyatta through the ballot, others keenly aware of the possible impact on the country should he win.

"Those indicted may feel they have nothing to lose and their best bet is to get elected by any stratagem available" in the hope of defying the court once in office, Dowden wrote in a recent article.

"A vote in which one candidate has nothing to lose could turn into civil war," he added, a grim warning many Kenyans might think an exaggeration.

At local levels, the issue of the ICC may be less important, with multiple elections for powerful regional governor positions, members of parliament and local councils potentially having more impact that top level politics.

But Human Rights Watch warns the risk of political violence is "perilously high".

At least 484 people were killed and over 116,000 fled their homes due to ethnic violence last year, according to the United Nations.

Should Kenyatta win as the latest opinon polls suggest, the country could face the absence of its president and vice-president for several months -- if not years -- in The Hague.

Kenyatta's and Ruto's cases "could be as much of an issue in Kenya's 2018 general elections as they are proving to be in 2013," warned Gabrielle Lynch in a recent paper for Britain's Chatham House.

Even if a victorious Kenyatta cooperates with the ICC -- as he has promised -- it could be "difficult for many countries to have normal diplomatic relations" while donors might reduce bilateral assistance, the ICG added.

However, diplomats say that legal restrictions only come into play should Kenyatta and Ruto end their cooperation with the court.

The same issues remain even if key rival Raila Odinga wins, should he then decide for political expediency -- for example, not wanting to rile the supporters of a defeated Kenyatta -- to allow the ICC indictees to avoid trial.

Some speculate Kenyatta may hope that potential sanctions are just rhetoric, since Kenya -- currently fighting Al-Qaeda linked Islamists in Somalia -- is of strategic economic, security and political interest to the West, Dowden added.

Kenya potentially could rely on other partners, especially China.

"Again and again over the last 50 years Kenyan politicians have been able to defy Western diplomatic pressure knowing Washington and London needs Kenya more than Kenya needs them," Dowden said.