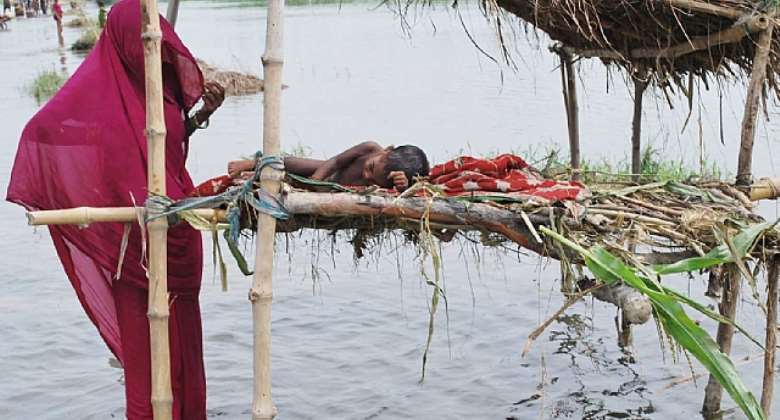 Narmada Bachao Andolan has been using Jal Satyagrah since 1993 as a means of protest wherein people facing submergence stay put in waist or sometimes neck deep rising waters of the river and endanger their lives. The administration or the government on the other hand is busy trying to save people by either forcibly pulling them out of water or agreeing to talk to them on their demands. Last year in Ghoglagaon of Khandwa district of Madhya Pradesh people were left standing in water for 17 days and the government was not willing to talk to them until the body parts of some of the people in water started dissolving.

Far away from the Narmada valley people in Sitapur district of U.P. have now decided to adopt this method of protest to attract the attention of an insensitive government.

About 800 families are living on roadside for the last two years on a road which abruptly ends over river Sharda in Reusa Block. Their villages have been erased from the face of earth as the furious Sharda changed its course by 7 kms over several years. However, the Sitapur district administration or the UP government do not have any plans either to arrest the erosion due to Sharda, which threatens to engulf more people in the coming monsoon, or to rehabilitate the people uprooted over the past years. The most the administration does is distribute some relief which is pittance and the people really consider it a disgrace to their dignity.


Over the last half a century Sharda has devoured many villages in four Blocks of Sitapur District - Reusa, Sakran, Rampur Mathura and Behata. Villages which have been completely erased include Kashipur, Senapur and Mallapur among others. It appears that the palace of erstwhile Mallapur estate simply disappeared in thin air when the waters receded. Where once this palace stood is flat sand today. There is no trace of even a brick of this palace.

The river becomes demonic during monsoon when water from the Banbasa dam in Sitarganj and from rivers in Nepal is released to protect the dams there. The erosion due to Sharda and Ghaghara, another river which also originates in Nepal and then joins Sharda not very far from here, affects Pilibhit, Lakhimpur Khiri, Sitapur, Barabanki, Bahraich, Basti and Ballia Districts of UP. Thousands of farmers living on the bank of these rivers are able to cultivate only one crop a year because of the flood. People are not able to take advantage of schemes like National Rural Employment Guarantee Act (NREGA) also because of this reason and hence the farmers and labourers of this area face problem of food scarcity. A number of them have simply fled the area and sought refuge in one of the metropolitan cities of the country in search for some decent living.

In 2011, 4 primary and 2 secondary schools in Kashipur and Mallapur were submerged. About one thousand hectares of agricultural land was also drowned. Another primary school and community hall were lost to the waters in 2012 in Mallapur. Primary schools in Kamharia, Sheikhupur and another in Kashipur are on the verge of being drowned. The food security measures such as Integrated Child Development Scheme (ICDS) and Mid-Day Meal (MDM) are almost non existent resulting into severe malnourishment among children. But the government does not seem to be worried about its own infrastructure getting immersed in water and people of the area being denied the benefits of various developmental and social welfare schemes. The gravity of the nature of emergency does not seem to have dawned on the ruling class. The people have been left to fend for themselves.

Kamharia, Sheikhupur and Badhainpurwa villages face the threat of being overwhelmed by river. A bridge near Harvilaspurwa in the Gram Sabha of Ajaypur Bhithauli is also in danger. Several people have lost their lives due to psychological pressure. Children from huts on roadside face danger from moving vehicles. People are living the life of helpless destitute.

Last year the district administration put earth filled cement bags to prevent the erosion over 1300 metres of population belonging to Asaipur, Badhainpurwa, Kamharia and Kashipur villages. However, this effort was inadequate. The district administration has sent a proposal to the Irrigation department of UP government to take measures to prevent erosion of the above mentioned villages in the form of a series of projects on the banks of the river. Unless urgent sanction and initiation of work begins a large population and number of houses and fields face submergence in the coming months. The irrigation ministry is headed by powerful politician Shivpal Yadav, who also happens to be the uncle of present Chief Minister. Hence the only thing lacking is probably political will to save the lives and properties of people from the impending danger.

To protest against the government apathy people of the area have decided to stage a jal satyagrah by getting down into the waters of Sharda and standing there all day long for two days. If the action fails to move the government people could follow it up with an indefinite action.

It is strange that inspite of developing world class infrastructure and having created an environment in our homes and workplaces suited to our needs we are still far away from taming the fury of nature. It is not very long back when a breach in dam on Kosi river in Bihar almost resulted in flooding of big areas of north Bihar. The human being seemed helpless in the face of such a tragedy. Kosi is also a reminder that any attempt to tame the nature is not foolproof. Hence an intelligent solution to the problem of erosion due to Sharda is required.

(The author is a Ramon Magsaysay Awardee and a senior social activist. He is the Vice President of Socialist Party (India); member, National Presidium, Lok Rajniti Manch; and writes for Citizen News Service - CNS. He has led National Alliance of People's Movements (NAPM) and is a former faculty of IIT Kanpur. He did his PhD from University of California, Berkeley and is a visiting faculty for a number of US Universities and IITs in India. Email: [email protected])

REVENGE: A lady got pregnant by her sister’s husband who was...
46 minutes ago