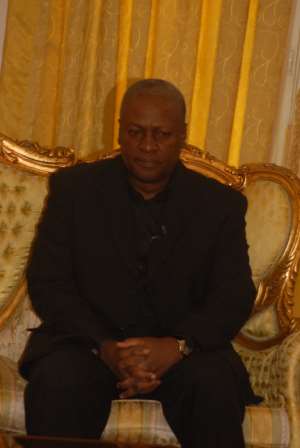 'He performed his duties creditably well to the extent that chiefs appealed to me to retain him as the Volta Regional Minister soon after the 2012 general election,' he said.

President Mahama said this when he joined numerous mourners at the State House to pay their last respect to the late Volta Regional Minister and Member of Parliament for the Buem.

The mourners, who filed past the body, were made up of the Ministers of State, Members of Parliament, Metropolitan, Municipal, District Chief Executives and members of the Diplomatic Corps.

A Catholic mass service was also celebrated to bid him farewell before the body was airlifted to Ho where another church service would be held after which the body would be conveyed to Buaman in the Jasikan District, his hometown, for burial.

The late Mr Kamel was born on December 21, 1962 in Peki Blengo in the Volta Region, started his primary education at the Savelegu L/A Primary, then to the Airborne School Complex in Tamale and gained admission to St. Charles Minor Seminary in 1980 to 1985 and was the Sports Prefect in his final year.

He left behind a wife and three children.