GOOD TIMES AHEAD ….Mahama Assures Nation And Calls For Support 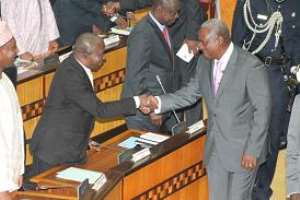 The President, John Dramani Mahama, has assured the nation of good times ahead, despite the difficulties being experienced within some sectors of the economy, which is having a crippling effect on the ordinary citizen.

According to the President, the current difficulties the country is going through must strengthen the collective resolve towards a future of limitless possibilities, arguing that 'despair is not an option, and we shall not make excuses.'

President Mahama made this observation yesterday in Parliament, during his address on the State of the Nation, which was publicised live on state and other private media networks.

Millions of Ghanaians are today experiencing very erratic and frustrating electricity supply. Compounding the situation is unstable power supply and the recent price increase in petrol and other petroleum products.

To the President, the current power outages do not reflect the investments and progress made by the country in the area of electricity generation.

However, despite the difficulties his administration is facing, he was optimistic that the country would in no time overcome those problems.

'Let us build trust - remembering always that civility, humility and discipline are signs of a strong national character. Real change is when everyone pulls together, works together, when we all exercise our responsibilities to country, our local communities and our families,' he noted.

In the midst of a divided Parliament and nation, President Mahama promised to work hard 'to ensure that every household in this country enjoys uninterrupted water and power supply.'

In doing so, he promised to fast track the restoration of the West African Gas Pipeline, planned for completion in April 2013. The repercussions of the incapacitated gas pipeline has brought near total darkness to the country's neighbours, Togo and Benin, and led to the loss of over 250 Mega Watts (MW) of electricity supply to Ghana.

He said in order to get businesses going, the government would install over 500MW of additional generation capacity, which includes 132MW from the Takoradi Thermal Plant Three by the end of February; 130MW from the Bui Hydroelectric  Power Project by end of April.

This will be increased to 400MW by end of September this year. In addition, he said the country was expecting 2MW from a Solar Park at Navrongo by the end of February.

' With the addition of Takoradi Three this month, and the first power supply from Bui in April, our current deficit of about 200MW at peak, should be sufficiently ameliorated.

'While this will give us comfort from the current unpleasant load shedding, the system will still be fragile, with a slim margin of redundancy. Restoration of the WAGPI, and Asogli coming back on stream, will give us a better margin of comfort,' he noted.

To complement the above-mentioned intervention measures to restore uninterrupted power supply, the President also gave indications that work had started on a 161KV Tumu-Han-Wa transmission line in the Upper West Region, as well as the Kpando-Kadjebi Transmission project, a new 330KV transmission line from Aboadze-Prestea-Kumasi and Tamale-Bolgatanga.

In order to be self-sufficient in power supply, the President assured the nation that he would give his personal attention to the Gas Infrastructure Project, which is steadily progressing, at Atuabo in the Ellembelle District of the Western Region.

The project, he noted would be completed by the end of this year, to put the country on track to achieve the planned expansion of 5,000MW capacity of power generation by 2016.

To mitigate the effects of the increase in petroleum products on the poor and the vulnerable, President Mahama promised to introduce solar lanterns, expand the life-line threshold on energy for poor households, as well as deepen social protection initiatives to cover them.

Curtailing Gov expenditure
In order to curtail the government's expenditure on fuel, the President said his administration would rationalise the use of government vehicles and fuel in the next few weeks.

'I have given the Chief of Staff appropriate directives on this matter. We will discuss with auto companies a scheme to enable senior public servants to buy on hire purchase their own vehicles, and curtail the reliance on the use of state vehicles,' he noted.

Mr. Mahama further noted that his administration had taken stringent measures to curtail MDAs spending beyond their budgetary allocations, and new mechanisms of strict monitoring would be announced by the Minister of Finance in the 2013 budget.

The Ghana Revenue Authority and other agencies, he noted, had been tasked to help raise tax and non-tax revenues to levels that benefit the country's emerging Lower Middle-Income status.

He promised to plug the leakages and raise the country's ratio of revenue to GDP from the current meager 16% to above 20%.

Employment and Labour
To ensure a resilient economy, the President promised to expand opportunities for all, where decent and sustainable jobs leading to meaningful lives would be a top priority.

He said he had directed the Ministry of Employment and Labour Relations to work with the Ghana Statistical Service to produce quarterly labour surveys to inform policy and planning.

These surveys, he noted, will create an accurate database of the unemployed among all categories of the Ghanaian society, and track these on a quarterly basis, as well as ensure that new jobs were accurately recorded and tracked, while making it possible to coordinate the various job-creation and employment initiatives.

Education
To ensure a sound, meaningful and relevant education in the country's quest to build an equitable society, in which the productive capacities of the people are tapped for national development, the President promised to prioritise and expand access to education at all levels, aggressively address quality enhancement and outcomes at all levels, by putting in place measures to monitor quality of educational service delivery, especially, teaching and learning at all levels of the country's educational system, and work to improve gender parity in education.

In addition to the above, President Mahama promised to reward outstanding educational service providers to boost morale in the sector; work towards standardisation and affordability in fees; and encourage community participation in the management of schools.