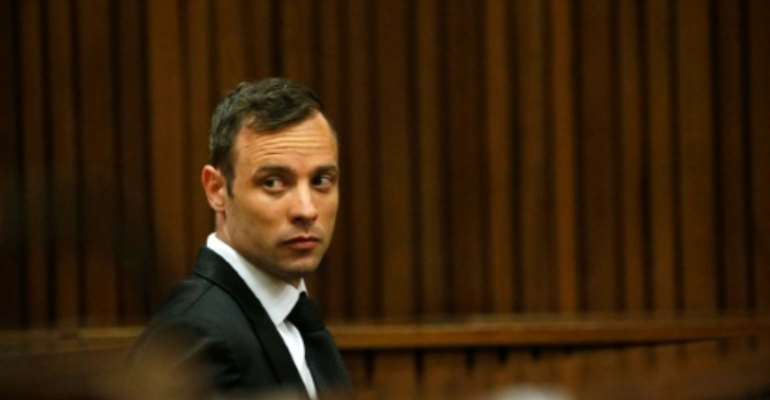 Former Paralympic champion Oscar Pistorius sits in the dock at the North Gauteng High Court in Pretoria, South Africa, ahead of his bail hearing, December 8, 2015. By Siphiwe Sibeko (POOL/AFP)

Pretoria (AFP) - Former Paralympic champion Oscar Pistorius was released on bail Tuesday, as he vowed to appeal against his murder conviction for shooting dead his girlfriend Reeva Steenkamp in 2013.

South African judges last week found him guilty of murder and overturned his earlier conviction on the lesser charge of culpable homicide for killing Steenkamp, a model and law graduate.

Pistorius, 29, wearing a dark suit, white shirt and black tie, appeared relaxed at the bail hearing in the Pretoria High Court, chatting with his legal team before standing in the dock to hear the judge's ruling.

He was released from jail in October to live under house arrest at his uncle's house in Pretoria after serving one year of his five-year prison sentence for culpable homicide -- the equivalent of manslaughter.

Under the new conviction for murder, he faces a minimum 15-year jail term that may be reduced due to time already spent in jail and as he is a first-time offender.

"The applicant is released on bail of 10,000 rand ($690)," judge Aubrey Ledwaba said, adding Pistorius would remain under house arrest.

Ledwaba said Pistorius would be electronically monitored to track his location, but would be allowed to leave the house at set times with official permission.

The court will meet again on April 18 to seek an update on whether Pistorius's appeal to the Constitutional Court, South Africa's highest court, has been accepted.

Pistorius's bail application Tuesday outlined the basis of his bid to go to the Constitutional Court after the murder conviction by the Supreme Court of Appeal last week.

"(It) impermissibly reconsidered the factual finding made by the trial Court that I genuinely and honestly believed that my life and that of the deceased were in danger when I discharged the shots," he argued.

Pistorius spoke in court only to calmly say "I do" when asked whether he made his bail application voluntarily.

No date was announced for his re-sentencing.

A lawyer for Steenkamp's family told AFP that they "understand it is his constitutional right to (appeal), but believe it is a delaying tactic as they do believe that he is guilty of murder."

Martin Hood, a criminal lawyer based in Johannesburg, told AFP that Pistorius was now "clutching at straws" by trying to appeal to the Constitutional Court.

On the streets outside the court, South Africans voiced their displeasure with Pistorius, saying he was not prepared to take responsibility for his actions.

"He's supposed to get 15 years in jail, he deserves it," said Thomas Mdlule, a 30-year-old selling newspapers on a corner close to the court.

"He must be inside jail, not under house arrest."

Pistorius killed Steenkamp in the early hours of Valentine's Day two years ago, saying he mistook her for an intruder when he shot four times through the locked door of his bedroom toilet with a pistol he kept under his bed.

During his dramatic trial, he denied killing her in a rage, sobbing and occasionally vomiting in the dock as details of his lover's death were examined in excruciating detail.

The murder conviction ruling last week said that it was "inconceivable that a rational person could have believed he was entitled to fire at this person with a heavy calibre firearm".

The double-amputee sprinter, known as the "Blade Runner" because of the prosthetic legs he used on the track, made his first appearance in public last month since leaving jail when he reported for community service at a Pretoria police station.

He killed Steenkamp at the peak of his fame, and he has since lost his glittering sports career, lucrative contracts and status as a global role model for the disabled.

No family members from either side were in court Tuesday.

The bail application revealed Pistorius is studying a business and law course via the Internet at the London School of Economics.