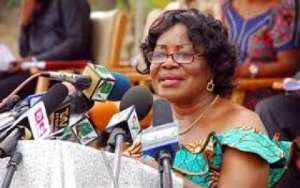 There was wild jubilation at Apam, capital of Gomoa West on Wednesday when the announcement was made that Mrs Ama Benyiwa-Doe's has been appointed as a Member of the Council of State.

He said with Mrs Benyiwa-Doe as a Council of State member, she would be in a position to collaborate with Mr E.K.T Addo who succeeded her to bring a lot of development projects to the Region.

The DCE appealed to chiefs in the Region to rally behind the two personalities to accelerate development.

Mr Aidoo-Mensah commended Mrs Benyiwa-Doe for being the first woman to head the Region and also being the first member of the National Democratic Congress (NDC) to complete a four-year term.

The DCE also commended her for reactivating the Central Regional Development Commission which has brought on board a lot of development projects.