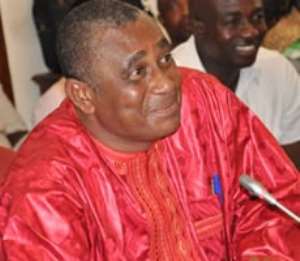 Parliament on Wednesday paid glowing tribute to Mr Henry Ford Kamel, late member for Buem in the Volta Region, who passed away last Christmas, describing his demise as a “very great loss” to the country.

The lawmakers praised Kamel, who until his death was the Volta Regional Minister, for his astuteness, gentility and sociability, saying he was a hard worker and great unifier, who sought the development and peaceful coexistence of all communities in the Region and nationwide.

The Members of Parliament (MPs) were contributing to a tribute read on the floor of Parliament by Mr Alfred Kwame Agbesi, Deputy Majority Leader and MP for Ashiaman.

Mr Kamel will be would be buried on the February 23, in his home town in Guaman in the Buem Constituency.

Parliament suggested the need for members to undergo regular health checks in view of the stressful nature of their work.

They prayed for God's fortitude for the bereaved family and sought divine guidance and direction for Mr Kamel's constituents.

Minority Leader Osei Kyei Mensah-Bonsu said the late Legislator was controlled, measured and one who did not yield to flippancy and was consultative and eager to learn.

He said the greatest tribute to his memory was to ensure that there was peace in his household, his family, constituency and the region.

Paapa Owusu Ankomah MP for Sekondi said the late lawmaker was a gentle and candid person who was politically astute and built consensus among both sides of the House.

He said Mr Kamel was ready to learn to enable him contribute meaningfully to parliamentary deliberations and democracy, adding that the National Democratic Congress (NDC) had lost an asset and the nation a great son.

Mr James Klutse Avedzi, MP Ketu North said the late legislators' style of relating to people was par excellence and called on others to emulate the life of the man.

He said the Mr Kamel would be remembered for his hard work and humility.

Mr Mohammed Mubarak Muntaka, MP for Asewase drew attention to the rate at which MP's were losing their lives.

The late Kamel, who was born on December 21, 1961, came from Guaman in the Jasikan District of the Volta Region, and was an Economist and Banker by profession.

He had been MP since January 2005, and he was re-elected to represent the people of Buem, in the December 7, 2012 parliamentary election.

He was also, former Deputy Minister of Lands and Natural Resources during the Mills administration.

Mr Kamel was survived by a wife and three children.