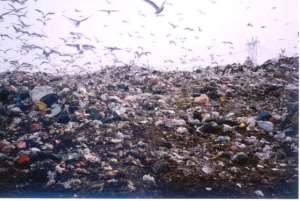 Government has acquired a seventy-seven acre land from the chiefs and people of Otinibi to be used as a dump site to serve Accra.

This, according to the Member of Parliament for the Madina constituency, Amadu Sorogo, will process about 20,000 tonnes of garbage that may be produced in the nation's capital.

In an exclusive interview with Citi FM's Richard Sky, Hon. Sorogo said one of the major projects to be undertaken by the newly created municipal assembly was to manage waste since the municipality boasted of one of the biggest markets in the capital; Madina market.

“Immediately the new Municipal Assembly was created, one of its major projects was to manage the garbage because one of the biggest markets in Accra is the Madina market so tonnes of garbage are created everyday so there was the need for us to find a final disposal site,” he stated.

The Member of Parliament further indicated that the project was going to be a joint partnership between the chiefs and people of Otinibi, Saachi Global Recycling Company limited and Municipal Assembly.

“An Indian company, Saachi Global Recycling Company limited is pursuing this, the chiefs and people of Otinibi are also interested so it's going to be an equity share and the assembly is by law mandated to run it so this is going to be like a PPP,” he said.

He also said the Accra Metropolitan Assembly (AMA) would benefit from the project.

“When the project finally takes off, because of the volume of the garbage that will be needed, Nkwantanang Madina and other sister municipal assemblies can't produce it and therefore the AMA will benefit from this,” he added.

Hon Sorogo also noted: “Saachi Global Recycling Company is a reputable Indian company deals with waste conversion. It converts waste materials to both energy and compost which can be reused for the benefit of the country.”

Hon Sorogo also said there will be no problems with issues of stench as the project was going to be a modern facility that will block all stench produced.

The Achimota landfill site served as the central dumping site by major waste management companies until a public outcry forced the AMA to stop waste companies from dumping there.