Enter the Chad Dragon in the ECOWAS-CENSAD region! 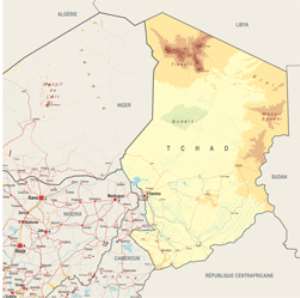 Back in October 2011, my piece “Hot Issues on the AU needing popular advocacy (I) – or Travelling Cheaply in Africa, & Southern Sudan” touched briefly on CENSAD. I started off with a history of CENSAD, going on to ask the way forward.

The Community of Sahel-Saharan States was established in 1998 by the late Colonel Qaddafi. After the rationalization of the regional economic communities in 2006, it became an AU-REC – that is one of the eight RECs mandated and recognized by the African Union. It has twenty-eight members, and Ghana is a member.

Despite many meetings that had taken place and a then-fully-functioning website on http://www.censad.org, the uprising that started in Libya in March threw a huge spanner in the works of the organisation, effectively throwing the regional grouping out of sync with the other RECs at its base in Tripoli. Regrettably, the conspicuous absence of the African Union itself on the future of CENSAD has not helped dispel the notion that the AU is nothing more than a “toothless” bulldog.

The passing of Qaddafi, I intoned, has effectively taken the wind out of the sails of CENSAD, probably throwing all the good work – including the Great Green Wall being built along the sub-region to protect the region from climate change; as well as the establishment of a free-trade area of ECOWAS-UEMOA-CENSAD/ECOWAS-CENSAD/ECCAS along the likes of the SADC-COMESA-EAC tripartite free trade area, which was mooted in 2008.

Going forward, I would expect to see the AU taking serious the need to engage the National Transitional Council in Libya on their commitments to the African Union. This would include discussions on Libya and where it stands on the establishment of the AU-mandated and Tripoli-hosted African Investment Bank, as well as the state of play of CEN-SAD, and how it can be factored into discussions of Africa's ongoing discussions over Africa's integration.

In January 2013, an organisation by the name of Centre 4S, which is based in Morocco, and which researches defence and security in the Sahelo-Saharian band /strip; armed violence and terrorism, among other subjects, released a paper in French entitled “Revitaliser le CENSAD”, or reinvigorating CENSAD.

The main idea of the paper is to look at the critical role CENSAD can play in the Sahel; ways in which cooperation and synergy can be created around the zone, and ways in which there can be strengthened cross-border cooperation.

Truth be told, the uniqueness of CENSAD is in its ability to merge ECOWAS; Arab Maghreb Union and ECCASS countries together. The article maintains that the contribution that CENSAD offers its member states ought to be re-examined. Furthermore, the crisis in Mali has set an important precedent for the member states to really get serious on what can be done to use the body as a tool for securing the region politically and diplomatically.

The paper states that “CENSAD should present itself as an institutional and diplomatic framework, of unity and action, capable of formulating a pertinent response, inclusive and varied, to current security challenges.” Even more important for a reinvigorated and re-launched CENSAD should be the aspiration to complement ECOWAS and the Arab Maghreb Union, especially as they are two RECs most-familiar with the security deficits of the Sahel region. These efforts will “equally allow for a better coherence and coordination of different initiatives on the Sahel”, such as Algeria's Joint Military Command with Mali; Niger; and Mauritania.

Chad rising, Chad in ECOWAS?
Chad is a Central African country and a member of the Economic Community of Central African States (ECCAS). Some wonder why it should not also become a member of the Economic Community of West African States (ECOWAS) According to one Elvis Kodjo, writing in fratmat.info, 'although the idea has not been officially announced, the spokesman of the Ministry of Foreign Affairs Moussa Mahamat Dago indicated on 19 January 2012 in Abidjan during a celebration of Chad's 50th anniversary that the issue was currently being considered.”

The idea for joining rests with the fact that Chad has emerged from several decades of unrest, and understands “more than any other African country that “African integration is necessary for its development”.

The fact is that since the start of oil production in 2005, “Chad has become the ninth largest African oil producer and has improved its network of roads, which has expanded from 200 to more than 3 000 km. Plans for a new, ultramodern airport are underway, and a railroad linking the country to Cameroon will soon be constructed”. Kodjo maintains that “while being a veritable construction site, Chad also has forty million hectors of arable land”.

In order to encourage the effective use of this land, the Ministry Of Foreign Affairs spokesman Mahamat has said that the country “has equipped itself with a particularly attractive investment code” and is looking to secure the best opportunities for itself by diversifying its economic partners in both Central and West Africa.

In March 2011, Chad was, in fact, granted observer status of ECOWAS and my monitoring of Chad's wooing suggests that Chadian President Idris Deby is still keen on sweet-talking Jonathon—in his capacity as leader of the regional hegemon, Nigeria—to accept Chad as a full member of ECOWAS. In April 2012, I was quick to speculate that it is unlikely to happen soon, given the instability in the Sahel region and the headaches of Mali and Guinea-Bissau. All that can be said for now is for observers to keep a keen eye on Chad making “incursions” into ECOWAS sooner than later.

Then Mali happens. And suddenly, we are confronted with a Chad that is offering support to the Africa-led support mission in Mali (AFISMA) to the tune of around 3000 troops, which is around a third of what all ECOWAS troops have offered.

One of the reasons why Chad is an important country to look out for is for what happened on Saturday 16 February when Chad's president Idris Deby hosted some eleven leaders of the CENSAD regional economic community that was established in 1998. The capital N'djamena played host to what should have been 20 members of the populous grouping. Even if a little over a third of the Heads of State showed up, it was encouraging to see that the 17 other member states dispatched representatives. Furthermore, it has shown that the raison d'être for the establishment of the grouping might still be relevant.

Some of the major outcomes include a revision of the Charter, to reflect the fact that the organisation is interested in two major things: peace and security; and sustainable development. Two permanent organs will be established to this end, and Egypt is likely to host the peace and security organ.

As this is a developing story, with much of the material in French, watch this space over the next couple of weeks when the implications of a rising Chad will begin to unfold. For what it is worth, CENSAD's next meeting will be in Morocco, which is itself making overtures to re-join the African Union.

In April 2012, I wrote of how there is talk of an ECCAS-ECOWAS-CENSAD free trade area along the likes of the Tripartite FTA (T-FTA) of SADC-COMESA-EAC that was mooted in 2008. With Central Africa only last week meeting and seeking concretely to rationalise its programmes for ECCAS and CEMAC to harmonise and merge, it is really exciting times for African integration!

ENDs
In 2009, in his capacity as a “Do More Talk Less Ambassador” of the 42nd Generation—an NGO that promotes and discusses Pan-Africanism--Emmanuel gave a series of lectures on the role of ECOWAS and the AU in facilitating a Pan-African identity. Emmanuel owns "Critiquing Regionalism" (http://www.critiquing-regionalism.org). Established in 2004 as an initiative to respond to the dearth of knowledge on global regional integration initiatives worldwide, this non-profit blog features regional integration initiatives on MERCOSUR/EU/Africa/Asia and many others. You can reach him on [email protected] / Mobile: +233.268.687.653.