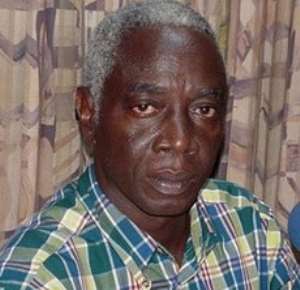 Of course, they have every right to mount a staunch defense of their clansman and kinsman; what they do not have is the right to tell aggrieved Ghanaians whose political fortunes have been adversely and deliberately affected by the gross and flagrant misconduct of Dr. Kwadwo Afari-Gyan, acting in his official capacity as Ghana's Electoral Commissioner, to leave their blood relative alone.

It is also rather offensive for Mr. Martin Kwasi Addae, the elder brother of the embattled Electoral Commissioner, to arrogantly suppose that in accepting the paid post of Electoral Commissioner, for which he has been fully and contractually remunerated for some twenty years now, the former University of Ghana political science lecturer was doing anybody any fvor but himself. Of course, now Dr. Kwadwo Afari-Gyan has been forensically exposed for the patent and veritable fraud that many Ghanaians, particularly those ideologically aligned with the main opposition New Patriotic Party (NPP), have always suspected him to be.

Anyway, even as I compose this piece (2/19/13), at least three operatives of the EC in the Savelugu district in the Northern Region were widely reported to have been caught tampering with some of the electoral documents, or pink slips, being vehemently disputed by the NPP before the august Supreme Court of Ghana.

Indeed, if they really cared about the fortunes and reputation of their kinsman, what the Afari-Gyan clan ought to be doing presently is to be consulting with some high-powered, or crackerjack, lawyers in order to vigorously defend not only whatever may be left of the reputation and integrity of the Electoral Commissioner but, even more significantly, to ensure that after all has been said and done, their embattled clansman would not be headed for Nsawam and for a considerably long prison sentence.

We just hope it does not quite come down to such a bleak outlook for Dr. Afari-Gyan, not because we believe the man does not deserve to be duly and severely punished with a long prison sentence, for God knows that he surely deserves to be slapped with a remarkably long jail term, but simply because we firmly believe that being promptly relieved of his long-held "sinecure," in retrospect, will be punishment enough.

We also find it to be equally significant for the family of Dr. Afari-Gyan to quickly come to the grim realization of the fact that it has taken so long to bring their rascally clansman to book, not because the soon-to-be former Electoral Commissioner had been up to any good, but primarily because the proverbial arm of justice is incredibly long such that it often takes a deliberately long time to round up and bring its culprits to book.

In other words, it was just a matter of time before Dr. Afari-Gyan and his shameless posse of corporate thugs were brought to book.

Perhaps what his most publicly vocal clansmen and kinsmen may want to do in order to mitigate the seriousness of the culpable acts of commission and omission on the part of Dr. Afari-Gyan, is to begin telling the "heroic" story of how the rural denizen of Berekum-Jinijini rose up from a life of nothing exceptionally remarkable to occupy one of the most powerful positions of trust in the country.

And, of course, also how apparent greed and a vacuous sense of invincibility caused him to play fast-and-loose with the hallowed rules of electoral democracy, until he unexpectedly came up against a far more determined and formidable force to reckon with in the process of his vainglorious attempt to canonize and immortalize himself above all else.