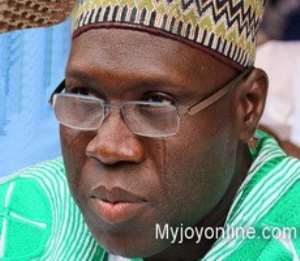 Alhaji Inusah Fuseini, Minister of Lands and Natural Resources has noted that reforming land administration can only be done under long term programmes, which requires decades of sustained commitment.

He said the Government of the National Democratic Congress is determined to pursue the objectives set out in the National Land Policy launched in 1999 with a long-term goal to stimulate economic development, reduce poverty and promote social stability.

Alhaji Fuseini made this known at the 2012 Annual Review Workshop for the Land Administration Project at Sogakope in the Volta Region.

He said President John Dramani Mahama has clearly indicated his commitment to reduce the level of poverty in the country by outlining in his administration's the policy direction and strategy with emphasis on priority areas including human resource development, quality education, modernised agriculture, good health, employment generation and infrastructure development.

Alhaji Fuseini said the Government “Better Ghana Agenda “is persistent to public outcries on bureaucratic hurdles and long documentation periods that potential developers and investors go through to get land documents registered.

He said the current activities being undertaken under the land administration project include the review of the legal framework, preparation of a national spatial development framework, modernisation of survey and mapping to aid the planning and registration processes and the establishment of customary land secretariats.

“It also includes the development of a computerised land information system, support to the Judiciary in the establishment of land courts and the support to the Accra Metropolitan Assembly in geo-referencing street naming and house numbering in the Metropolis.

Alhaji Fuseini who is also the Member of Parliament for Tamale Central said automating the business processes of the Land Sector Agencies would also enable the Ministry to build credible land information system which the courts would find as invaluable assets in dealing with land disputes and conflicts.

He said Government views the situation as unacceptable as the Ghana Shared Growth and Poverty Reduction Strategy, underpins the better agenda, which intends to reduce poverty and partner the private sector for phenomenal growth in all sectors.

“It is ironic that in the midst of abundant land resources, our land tenure system and land use planning systems have become one of the banes of our socio-economic development.”

He said the problems associated with land, its use and ownership were even more critical as Ghana's population continues to grow and puts more pressure on the land.

The Minister observed that failure of the present generation to address these problems would mean passing it on to the future generation and making them increasingly insurmountable.

Alhaji Fuseini assured the participants of the Ministry's utmost support in dealing with the implementation challenges the project is facing which includes poor attitudes towards meeting project timelines and milestones, poor responses from implementing agencies, particularly the Land Commission and the overall rating of the LAP-1 as moderately satisfactory.

He said Government would keep a keen eye on all activities of the project to ensure that its impact is fully felt by the ordinary people of Ghana even at the local and ward levels, adding: “The Ministry would not relent from its supervisory role under my watch.”