NPP Does Not Know The EC Law
By Margaret Jackson 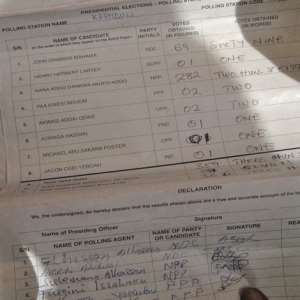 The NPP folks have gone to the Supreme Court to contest the results of the 2012 Elections without knowing the Electoral Commission (EC) Law. As a result,some leaders of the NPP have been jumping from one radio station to another and making statements that hugely expose them as totally ignorant of the EC law.

I want to state boldly that as far as the 2012 Elections results are concerned, an unsigned pink results sheet by a returning officer of the EC does not invalidate or annul the votes cast at any polling station. If you doubt this statement, please go and read the EC Law.

Therefore, the noise being made by Nana Akomea, NPP Communications Director and other leading members of the NPP that pink results sheets that were not signed by the EC's returning officers make the votes cast at those polling stations null and void very laughable.

On the pink results sheet, there is a declaration portion for all returning officers of the EC to sign after votes at all polling stations have been counted and declared as true and accurate account of the ballots at those polling stations. In fact, there is no portion on the pink results sheet for returning officers who fail to sign their signatures to state their reason/s of not appending their signatures.

Therefore, if at the end of the election at a polling station, the votes are counted and all the polling agents append their signatures at the declaration portion of the pink results sheet and for some known or unknown reason/s the returning officer fails to sign his/her portion on that sheet, it does not nullifythe votes cast at that polling station. This is something basic that the NPP should know and should have educated their anxious members about.

However, if a party agent fails to append his/her signature and also fails to state the reason/s for his/her refusal to append the signature, the results at the polling station becomes valid. It is only when a party agent refuses to sign his/her signature on the pink results sheet and state the reason/s why he/she refused to sign the pink results sheet that puts a red flag on the results at the polling station. That is the only time the EC is enjoined by law to review the situation at that polling station.

It is therefore very sad and worrying that the NPP folks who claim to have knowledgeable people who can read the law and explain it in its entirety do know this basic EC law and have resorted to throwing dust into the eyes of their supporters and Ghanaians at large.

The so-called arrest of three officers of the EC at Savelugu in the Northern Region by some supporters of the NPP for trying to validate some unsigned pink results sheet containing records of voting in the 2012 election does not add up.

All the parties that contested the 2012 Elections including the Supreme Court have copies of the pink results sheet from all the 26,002 polling stations. The results is currently being contested in court, so if somebody tries to validate some few copies of the pink results sheets who will that results sheet go to? Can the person who is trying to play mischief take the so-called newly validated sheets and distribute it to all the parties that contested the 2012 Elections and also provide same to the Justices of the Supreme Court? It does not make sense at all.

I do wish the NPP will stop this nonsense and do a deep soul searching and later inform their members about the truth on the ground. It is better to let the truth out in time than later. The NPPs basic understanding of what even constitute validation of results clearly shows that we have a party that is too keen to govern but do not even know the basic laws of the EC.

Please keep the faith, and keep talking about this article till you hear from me again.

I'll hand over power to the next elected president on 7th Ja...
31 minutes ago

[VIDEO] Ghana is hot; our girlfriends are moving to Togo – J...
40 minutes ago