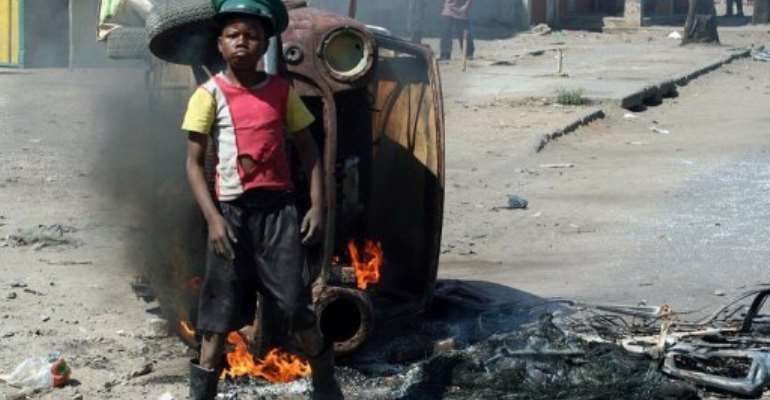 A protester stands near a burning car in Maputo amid unrest over poverty on September 2, 2010. By Sergio Costa (AFP/File)

MAPUTO (AFP) - Workers have unearthed hundreds of rounds of live ammunition at a garbage dump in Mozambique's capital, Maputo, local press reported Monday, years after a deadly explosion at a nearby weapons depot.

"Machine gun magazines were found in the trash. The Municipal Police removed them," police spokesman Joshua Lai told the paper.

The ammunition was live and capable of exploding, he said.

"These are dangerous. They can cause immediate deaths," he said.

Young garbage pickers made the surprise find at the weekend while sorting through the soccer field-sized Hulene dump in a densely populated neighbourhood.

"What concerns us most is that there is always trash on fire here, the fires never go out. It is very dangerous if the flames had reached the ammunition, it would have been a tragedy," an un-named garbage picker told CanalMoz.

Many weapons and bombs remain stashed in the southern African nation over two decades after a crippling civil war ended.

Some 100 tonnes of ammunition exploded at a weapons depot outside the city in 2007, killing close to 100 people and injuring hundreds more.

The vast open-air Hulene pit provides a livelihood for many of the city's poorest residents who make a living picking through the garbage.

Authorities have been under pressure to move the rubbish for some time because the smoke from smouldering trash poses a health hazard.