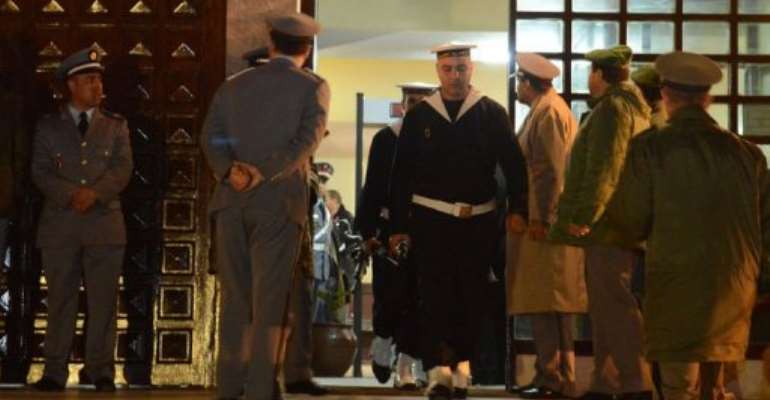 The court in Rabat on February 17, 2013, where 24 Sahrawis have been jailed killing members of Moroccan security forces. By Fadel Senna (AFP)

RABAT (AFP) - A Moroccan military court on Sunday handed prison sentences, including life terms, to a group of Sahrawis accused of killing members of the security forces in the Western Sahara in 2010.

Among the 24 defendants in court in Rabat, eight were jailed for life and four received 30-year prison terms, the MAP agency reported.

Two of the accused who received the lightest sentences, two years in jail, have already served their terms in custody.

A 25th defendant was tried in absentia and given a life sentence.

Some of the defendants had feared receiving the death sentence for the crimes of "forming criminal gangs, and violence against the security forces leading to deaths and the mutilation of corpses" in 2010, when authorities dismantled a camp where thousands of Sahrawis were living.

Authorities say 11 people died in the violence, among them members of the security forces, and 70 were wounded.

The politically-charged trial opened on February 1 after repeated delays.

Observers and rights groups have expressed concern over claims by the accused that they were tortured in custody. They also insist that the trial should have been held in a civilian court.

Amnesty International condemned the military trial as "flawed from the outset," and said torture claims should be probed.

At dawn on November 8, 2010, Moroccan security forces moved to dismantle the Gdim Izik camp near Laayoune, the main city in the disputed Western Sahara, which thousands of Sahrawis had set up in protest over their living conditions.

The intervention sparked clashes that spread to Laayoune, where businesses and public buildings were looted and torched.

The Western Sahara issue is a highly sensitive subject in Morocco, which annexed the former Spanish colony in 1975 in a move not recognised by the international community.

Morocco has proposed broad autonomy for the territory under its sovereignty, but this is rejected by Polisario Front separatists who insist on the right of the Sahrawi people to a referendum on self-determination.

The military court handed down its sentences overnight Saturday after retiring to deliberate in the afternoon.

Protests were held outside the court during the trial, though the scene was calm on Saturday night.

After the verdicts were announced, some relatives of the dead security officers expressed their satisfaction at the court's decisions.