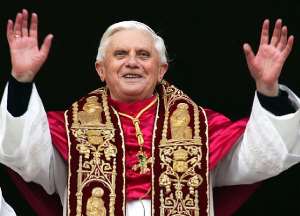 In the heated lead-up to the selection of a new pontiff, in the wake of the stunning resignation of Pope Benedict XVI, the elder brother of the pope, Rev. Georg Ratzinger, was widely reported to have intimated to the media that the moment for the selection and/or election of an African-born pope has not yet arrived (See "African Pope May Lack Experience - Benedict's Brother" Ghanaweb.com 2/14/13).


I am assuming here that since the retiring Pope Benedict is reported to be 85 years old, the Rev. Georg Ratzinger is at least 87 years old or even older. What the preceding means is that the Pope's brother is far past the age range of the membership of the Vatican's College of Cardinals that will be deliberating on the selection of Pope Benedict's successor.

But even more significant is the fact that at the time of Pope Benedict's selection nearly a decade ago, his elder brother told the global Catholic community that he, personally, found Cardinal Ratzinger to be woefully unequal to the job, because the latter was too cantankerous in temperament to meet the arduous demands of the job.


Ten years later, the Pope's brother has been proven embarrassingly wrong. It is interestingly clear, however, that Rev. Georg Ratzinger has absolutely no remarkable sense of shame whatsoever.

Needless to say, the Pope's elder brother clearly appears to have based the impunation of his younger brother's papal competence and integrity purely on sibling rivalry. And I am afraid that this gross error in judgment makes Rev. Ratzinger even far less qualified to critically assess the competence and experience of either of the two African-born cardinals widely reported to be in the running for the newly vacated papal position.


Indeed, he rather scandalously predicates his opinion on crass ignorance, and arrogance, dangerously verging on abject racism, when the elder Mr. Ratzinger asserts that "In Europe, we have many very able people [to occupy the post of Pope], and [that] the Africans are still not so well known and maybe do not have the experience yet."


Precisely what "experience" and "popularity" Rev. Ratzinger is talking about, short of the obvious "lack of whiteness" of the African-born cardinals, is not clear. And here ought to be quickly pointed out the fact that the position of the papacy is not a popularity contest but one of religious and spiritual enlightenment. Likewise, none of the European cardinals that Mr. Ratzinger has in mind are any more renowned than their African colleagues outside of Europe and the Vatican.

And, of course, we all know that most of the global cngregations of the contemporary Roman Catholic Church are located outside Europe, hence the inescapably cosmopolitan nature of the Church and the imperative necessity for the papacy to be diversified in order to more justly and genuinely reflect the congregational composition of the same.


Rev. Georg Ratzinger ought to also be promptly reminded of the rather fundamental and downright pedestrian fact that liturgical and managerial competence, vis-a-vis papal appointments, is not the especial prreserve of the European male cardinals of the Church. There is also an unmistakable streak of arrogance and a highly objectionable expression of racism in the following assertion attributed to the Pope's elder brother: "I'm certain [that] a pope will come from the new continents; but whether it will [ought to?] be now, I have my doubts."


I find the suggestion of Africa merely being a pristine frontier for the spread and practice of Catholicism to be unpardonably offensive. Nonetheless, it is quite understandable that a veritable product of Hitler's Nazi political culture would make such snide observations about the "competence" and "experience" of a non-European pope.