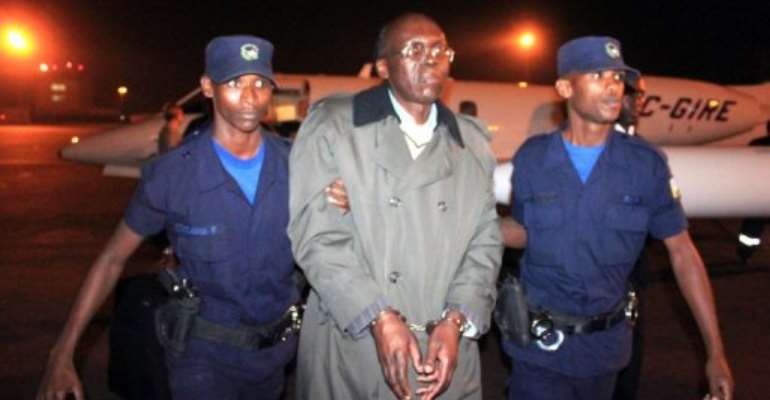 Rwandan ex-politician Leon Mugesera is escorted by policemen to a vehicle at Kigali airport on January 24, 2012. By Steve Terrill (AFP/File)

KIGALI (AFP) - Rwandan ex-politician Leon Mugesera, who is on trial for incitement to genocide, rejected all charges against him Friday, saying he was in Canada when the killings began in Rwanda in 1994.

"I reject formally and categorically all the charges against me, I deny having been involved in the killings directly or indirectly," he told the court, speaking in Kinyarwanda.

Mugesera, a linguist, allegedly called Tutsis "cockroaches" and "scum", and encouraged his fellow Hutus to kill them in a 1992 speech.

The prosecution has argued the speech helped trigger the Rwandan genocide two years later in which an estimated 800,000 people, mainly Tutsis, died.

"I have never incited people to commit genocide," he added. "I don't know of any plan or arrangement of the genocide and there has never been any document proving that there was a plan of killing people."

Mugesera said he was in Canada when an airplane carrying president Juvenal Habyarimana was shot down, the event that triggered the genocide.

"I remember the horror that befell Rwanda was sparked by the shooting down of president Juvenal Habyarimana... I was in Canada that day and I saw it on television like any other person," he said.

"I am not the one who sent the missiles that shot the plane," he added.

Mugesera was deported from Canada in January 2012 after 15 years of court battles and has already obtained a number of postponements in Rwanda.

The trial will resume on February 18.