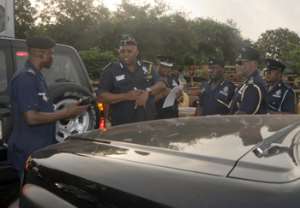 THE ACTING Inspector General of Police, Mohamed Ahmed Alhassan, has cautioned the public to adhere to traffic regulations as offenders would not be spared.

He issued the warning during a road tour yesterday in the Accra Metropolis.

Mr. Alhassan took his task to the roads to gather first hand information on how personnel of the service were manning vehicular traffic yesterday and also to observe if police strategies for road management were effective.

All officers helped in vehicular checks which resulted in the arrest of some recalcitrant drivers.

The team also sought to know how visible police were on the roads.

The Tetteh Quarshie-Spintex road, Nungua-Accra road and the Accra-Korle Bu traffic intersection were some of the roads the police chiefs toured.

During the tour the team observed that a number of drivers and pedestrians were causing traffic congestion which could have been prevented.

Most people were found either driving on the shoulders of the roads or engaged in one irregularity or the other, resulting in pedestrians competing with vehicles for passage.

The few drivers who were arrested would be processed for court.

The acting IGP ordered that the arrested persons be processed by the Central Motor Traffic and Transport Unit (MTTU) for court.

He cautioned the public to respect traffic rules so that they do not fall foul of the law since offenders would not go scout free.