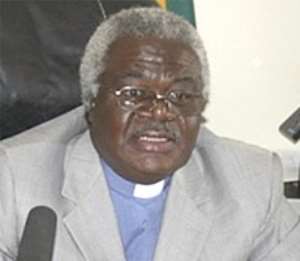 The moderator of the General Assembly of the Presbyterian Church, Rt Rev Professor Emmanuel Martey has admonished Christians and men of exceptional and principled characters, to take up political leadership in the country.

According to him, it is the only way the nation's development agenda could be leapfrogged into its assumed destination.

Corroborating his initial claim, Rt Rev Professor Emmanuel Martey noted that principled Christians with exceptional characters are imbued with the fear God and are ready to put the plight of the people at heart first, other than their own personal and self-aggrandizement.

The Presby Moderator, who was speaking at a special church service to honour the newly elected Member of Parliament for Fanteakwa South, Kofi Okyere-Agyekum, was however of the view that it is not advisable for the clergy to be in mainstream politics even though they have the right to exercise their franchise.

He emphasized that members of the clergy play intermediary roles in the church and is therefore not advisable for them to show their faces since all shades of political interest could be represented in the composition of the church.

Rev. Martey noted that “it is important that many Christians take political leadership positions, in order to be able to come face to face with the ordinary people on the street, and live and work with them on daily basis, and understand them.”

He said Christian political leaders are better placed to fashion policies that will take the people out from the doldrums of poverty.

He urged most of them to take inspiration from the newly elected Honorable member to take a cue from his shining example and go and shine in politics.

The Presby moderator indicated that many of our youth today have abandoned their ambition and jumped into politics because they find it as a quick way to make money. This he believes, is not helping the nation's growth and developmental agenda and he therefore asked the youth to stay focused on their dreams and build them to become giants in their area of endeavor.


On his part, the Member of Parliament for Fanteakwa South, Hon. Kofi Agyekum, thanked the church for supporting his political ambition and promised never to disappoint them but rather work hard to improve the conditions of the people who have mandated him to represent them in parliament.

Hon. Kofi Okyere-Agyekum is a founding member of the Christ Presby Church in Adenta.