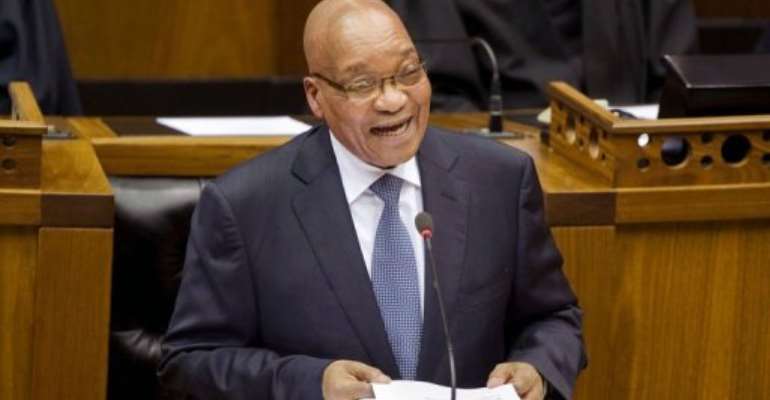 CAPE TOWN (AFP) - President Jacob Zuma on Thursday unveiled plans to review taxes, part of a plan to build a South African economy fit for the next decade and ease crippling unemployment that has spurred violent social unrest.

In his annual state of the nation address Zuma recommitted to big project spending, which would be paid for in part by a review of taxes and mining sector royalties.

The move is the clearest announcement by the state that royalties paid by the industry -- the bedrock of Africa's wealthiest nation -- will be reassessed as the country struggles to rally a sluggish economy.

Battling a "heavy flu", Zuma said a tax review study would be carried out later in the year "to make sure that we have an appropriate revenue base to support public spending."

"Part of this study will evaluate the current mining royalties regime, with regard to its ability to suitably serve our people."

The speech came just months after Zuma won another five year term at the head of the ruling African National Congress.

His backers will hope the address -- televised live on multiple channels -- helped shift the narrative away from government's failings and offer a vision for the future.

In the last year Zuma's premiership has appeared to lurch from crisis to crisis: from deadly mining violence, to corruption and graft allegations, to a cratering economy.

Perhaps most worrying for the ANC, there has also been growing impatience about the government's failure to reduce inequality almost two decades after the end of apartheid.

Addressing those issues, Zuma backed infrastructure upgrades which he said would help tackling a joblessness rate that hovers around 25 percent.

Rail, energy and 100 percent broadband Internet penetration by 2020 are among the upgrades being rolled out.

The state will "fast-track" many projects, Zuma vowed, and will have spent 860 billion rand ($97 billion) on infrastructure since 2009 by March this year.

South Africa's economy needed to grow threefold to meet a target of 11 million jobs by 2030, he said.

"Our GDP growth is expected to average at 2.5 percent, down from 3.1 percent in the previous year. We need growth rates in excess of five percent to create more jobs," he warned.

But the prospect of increased taxes has caused unhappiness among mining firms whose profits have slumped amid the wave of deadly unrest last year that killed more than 50 people.

Increased operating costs have led to warnings that a tax will be unaffordable.

The announcement comes after the ANC in December rejected nationalisation of mines in favour of capturing "an equitable share" of mineral riches through taxes.

"We believe that at a policy level we have managed to bring about certainty in the mining sector. The nationalisation debate was laid to rest in December at the ruling party's national conference," said Zuma.

However, analyst Peter Attard Montalto of Japanese bank Nomura said the mining tax was among parts of Zuma's speech that had "struck an uncertain chord".

The industry employs half a million people and contributes around nine percent of GDP.

Zuma also used his address to target South Africa's social ills of rape and violence, after the rape and disembowelment of a 17-year-old girl shocked the nation.

He also signalled that he had asked for "immediate" measures on violent protests following the shocking police shooting at the Marikana platinum mine that sparked last year's unrest and recent farming strikes.