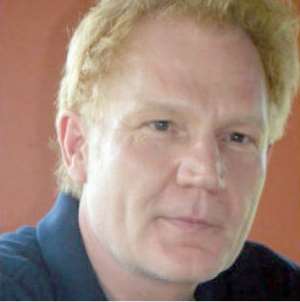 More interesting facts are emerging about the mysterious death of top Canadian government official, Darrell Prokopetz, 54, who died at the Nyaho Clinic after he was rushed there from the plush Golden Tulip Hotel in an unconscious state on January 30, 2013.

He was rushed to Nyaho Clinic while Canadian officials in Accra were combing the nearby 37 Military Hospital, moving from ward to ward in search for him, upon receiving the information from the hotel.

A press statement issued by the General Manager of the Golden Tulip Hotel, Thom Sheriff, on Tuesday, February, 12, a day after DAILY GUIDE broke the story, only confirmed the death without giving any more details.

According to Mr. Sheriff, the deceased Canadian top ranking government official was found unconscious in his room by hotel staff who immediately rushed him to the Nyaho Clinic.

According to Golden Tulip's boss, preliminary autopsy indicated that Mr. Prokopetz might have died of heart attack.

The story has made headlines in Canadian newspapers and other media outlets including online media, after the DAILY GUIDE publication on Monday.

Sources said two colleagues of the Canadian official who were attending the same programme, realizing that Darrell Prokopetz was not seen that morning, alerted the hotel officials who broke into his room only to find him in a state of unconsciousness. He was then rushed to the Nyaho Clinic where he was pronounced dead.

Apparently, Mr. Prokopetz , a project director with the Canada School of Public Service, the Canadian organization that trains civil servants, was in Ghana to train personnel at the Public Service Commission to develop an open and transparent recruitment process for civil servants in a manner based on merit.

The Canada School of Public Service has been involved in Canadian Development Agency's (CIDA) programmes in Ghana since 2011.

Initial information available to DAILY GUIDE was that Mr. Prokopetz was part of the 30-man Canadian delegation that visited President John Dramani Mahama on January 31, 2013.

But John Babcock, an Ottawa-based spokesperson for the Canadian Department of Foreign Affairs and International Trade, debunked the assertion that Mr. Prokopetz was part of the delegation, saying he was on a separate mission.

DAILY GUIDE sources alleged that the Canadian official, described as an amazing public servant, was found in an unconscious state amidst leftover bottles of alcohol and some substances believed to be drugs.

He was also alleged to have chaperoned some ladies into his hotel room, but DAILY GUIDE had not been able to confirm these allegations as at press time.

Also, the Airport Police Station's District Commander, Superintendent Aduhene Banieh corroborated the tragedy and told DAILY GUIDE that a coroner's inquest had been conducted on the corpse. But he was not forthcoming with additional information.

Indeed officials have been generally tight-lipped about details surrounding the incident, believed to be a major diplomatic blow to both Ghanaian and Canadian authorities.

Ms. Kernighan, and spokesperson for the Canadian Foreign Affairs Department, Amanda Reid have indicated that Ghanaian and Canadian authorities have mounted a full-scale investigation into the mystery death.

The allegations of possible drug use mixed with alcohol have not been confirmed by official sources.

Prokopetz is survived by his wife Monique Eady, and daughter Mia, both of whom live in Ottawa.

His online obituary said Prokopetz spent 34 years in the public service “and was proud to represent the Government of Canada in his numerous travels around the world.”

He grew up in Humboldt, SK, and lived in Saskatoon and Washington, DC.

Most recently, he had been a project director for “international service delivery” with the Canada School of Public Service.

Relatives, friends and colleagues who posted messages on his memorial site were mostly full of praise for the deceased Prokopetz, describing him as competent and well liked, with a good sense of humour.

'Darrell was an amazing public servant who embodied the concept of 'being in service',' wrote a colleague.

Robert Macdonald of Ottawa, who worked with Prokopetz on a project in Romania, wrote that he enjoyed Prokopetz's 'humour, expertise and easygoing nature.'

An Ottawa friend, Oksana McVicar, described Prokopetz as 'happy, caring, full of life and energy. He was a wonderful man, with a great sense of humour and one who was admired by so many in his professional world and by his friends.'

Prokopetz's family and friends gathered Saturday at the Minto Suites Hotel in Ottawa for a celebration of his life and accomplishments.

In lieu of flowers, the family asked those wishing to express condolences to make donations to the Heart and Stroke Foundation.