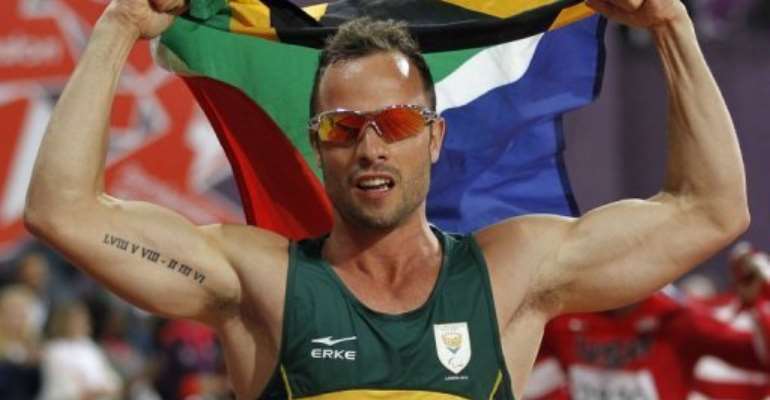 JOHANNESBURG (AFP) - Oscar Pistorius is one of the world's most recognisable sportsmen and an inspirational figure the world over after he became the first double-amputee to compete at both the Olympics and Paralympics last year.

The 26-year-old was already a household name going into the 2012 Games in London, after he made history by becoming the first amputee to run at the World Championships in 2011, where he took silver with South Africa's 4x400m sprint team.

The Johannesburg-born runner had both legs amputated below the knee when he was 11 months old after being born without lower leg bones. But he played sports unhindered while growing up, switching to running after fracturing a knee playing rugby.

"You're not disabled by your disabilities but abled by your abilities," he told Athlete magazine in a 2011 interview.

His 2011 appearance came after a high-profile controversy about whether he was even eligible to compete against able-bodied athletes, with some arguing that his custom-built carbon-fibre running blades gave him an unfair advantage.

He successfully appealed against an International Association of Athletics Federations (IAAF) ban against him competing at the 2008 Beijing Olympics to the Court of Abitration for Sport, although he ultimately failed to qualify.

It was at the Beijing Paralympics, though, where Pistorius supplanted his compatriot, the swimmer Natalie Du Toit, as the most well-known disabled athlete of all time, after he won all three main sprint events, the 100m, 200m and 400m.

He failed to retain all three of his titles in London, though, and was even embroiled, ironically, in a dispute about the length of his rivals' running blades, after he was beaten into silver by Brazil's Alan Oliveira in the half-lap race.

Defeat in the blue riband 100m followed but Pistorius bounced back to take gold with his South African team-mates in the 4x100m relay and storm to victory in the individual 400m, sending the 80,000 Olympic Stadium crowd wild.

However, both Games were a relative failure in terms of performance for Pistorius -- he also missed out on the Olympic final and was out of the medals in the relay.

The defeats showed the rapid improvement of other Paralympic athletes, which would help raise further the profile of the Games and its popularity, after for so long being seen as just a sideshow after the Olympics, he argued.

"I think people are going to look back at this Paralympic Games and for the first time really, truly believe that Paralympic sport is not just inspirational, it's hardcore sport," he said as the Games closed in the British capital.

"It's full of triumph, sometimes it has disappointment, but that's what we look for in sport. We want it to be competitive and that's what it's been about."

Such a comment was in keeping with Pistorius' philosophy in life and his attitude towards his own disability, which has proved no bar to success.

At high school, he was so good that his personal fitness coach said she was unaware for six months that he ran on prosthetic legs.

Off the track, Pistorius has a passion for motorbikes, adrenalin and speed: four years ago he crashed his boat in a river south of Johannesburg, breaking two ribs, an eye socket and his jaw.

He also once owned two white tigers but sold them to a zoo in Canada when they became too big.

Last December, he ran against -- and beat -- Arab horse Maserati in a race over 200m in the Qatari capital, Doha, and again saw his victory as a way of challenging perceptions about disabilities around the world.