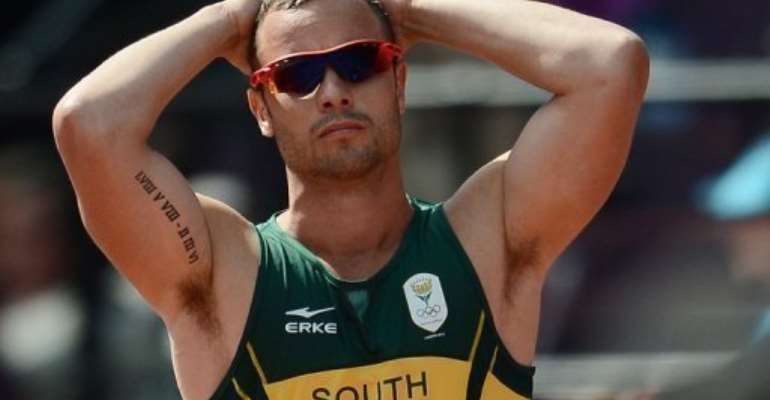 "I haven't seen him, he is with the police and the matter is in the hands of the authorities," said Henke Pistorius. "Obviously we are shocked."

The athlete, known as the "Blade Runner", was arrested for allegedly shooting his girlfriend dead after mistaking her for an intruder at his upscale home in an exclusive area near the South African capital Pretoria, media reports said.

Police spokesman Katlego Mogale said a "26-year-old man had been taken into custody for shooting a 30-year-old woman".

Mogale could not confirm if the suspect was Pistorius, saying his identity would be revealed only once he appears in court later on Thursday, Valentine's Day.

"The deceased was shot four times and died on the scene. It is believed that she was the girlfriend of the accused," said Mogale.

The shooting took place in a house inside an upmarket secure compound in Silverlakes, outside Pretoria, he said. Pistorius lives in the compound.

The "Blade Runner" -- known as such because of his carbon fibre running blades -- made history in 2012 when he became the first double amputee to compete in the Olympics.

Pistorius was named by Time Magazine last year as one of the world's 100 most influential people.

"You're not disabled by your disabilities but abled by your abilities," he told Athlete magazine in a 2011 interview.

The Johannesburg-born runner had both legs amputated below the knee when he was 11 months old after being born without lower leg bones. But he played sports unhindered while growing up, switching to running after fracturing a knee playing rugby.

At high school, he was so good that his personal fitness coach said she was unaware for six months that he ran on prosthetic legs.

But he was initially banned from competing in the Olympics in Beijing by the International Association of Athletics Federations (IAAF) on the grounds that his blades gave him an unfair advantage.

That decision was later overturned on appeal at the Court of Arbitration for Sport (CAS), although he ultimately failed to meet the Olympic qualifying standard time.

He went on to win a silver medal as part of the 4x400m relay team at the 2011 World Championships in South Korean city of Daegu before representing his country at the London Olympics and Paralympics last year.

Off the track, Pistorius is an adrenalin junkie, with a love of speed reflected in a passion for motorbikes.

Four years ago he crashed his boat in a river south of Johannesburg, breaking two ribs, an eye socket and his jaw.

He also once owned two white tigers but sold them to a zoo in Canada when they became too big.

South Africa has one of the worst crime rates in the world and many homeowners possess guns.