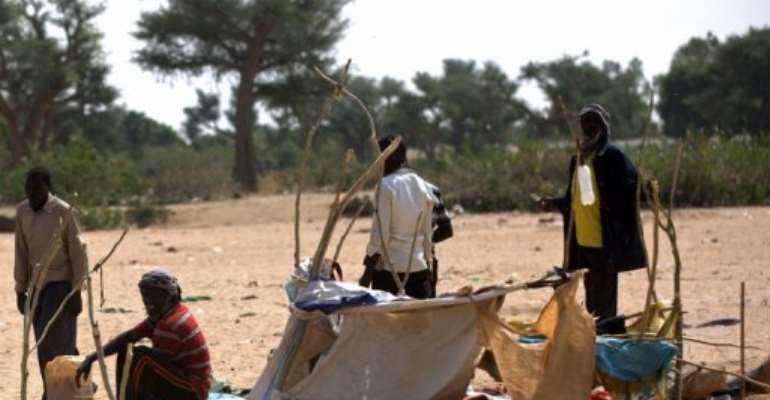 Sudanese minors take refuge in Saraf Omra, in the state of North Darfur, on January 13, 2013. By Rania Abdulrahman (UNAMID/AFP/File)

Tens of thousands of people who fled fighting last month in the Jebel Amir district of North Darfur state face a severe shortage of clean water and sanitation services, Oxfam said in a statement.

About 100,000 people were displaced across a wide area of Jebel Amir after inter-Arab tribal fighting in a gold-mining area.

"Those who have been able to flee are not sure when they will be able to return to their home areas, many of which have been destroyed in the fighting," Oxfam's Hamouda Kanu said in the statement.

"They have inadequate shelter for this colder time of year and are forced to defecate in the open. This could lead to the spread of disease," said the North Darfur humanitarian coordinator.

El Fateh Osman, the agency's Sudan country director, said there were fears of more displacement but "we are already struggling to meet the needs of those who have already been forced to flee their homes".

"Farmers were preparing for a good harvest this year but many crops in the area were burned in the conflict," it said.

The United Nations, citing figures from the government's Humanitarian Aid Commission, has said the largest group of 65,000 newly homeless are in El Sireaf town, in the far-west of North Darfur.

Aid workers are forced to fly relief materials to El Sireaf, limiting how much they can send, because one of the combatant groups from January's unrest controls the main road into the area, Oxfam said.

"Negotiations need to urgently take place so that this road is quickly opened up for humanitarians," it said.

The UN and its partners have already delivered more than 600 tonnes of food and other aid to the affected area.

A decade-long rebellion in Sudan's under-developed far-west Darfur region has been compounded by inter-Arab violence, banditry and tribal fighting.