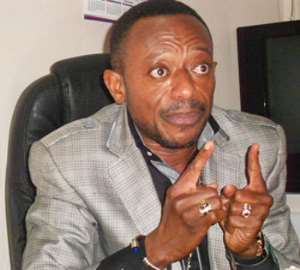 Rev. Isaac Owusu-Bempah, the popular prophet who has come under fire for claiming that President John Mahama needs special prayers if he does not want to die before the end of the year, has said he was ordained and commissioned as a Christian pastor by Archbishop Nicholas Duncan-Williams, the General Overseer of Christian Action Faith Ministries (CAFM), otherwise known as Action Chapel.

According to Rev Owusu-Bempah, founder and leader of the Glorious Word Ministry International at Odorkor in Accra, his credibility was intact and that he had in times past, revealed some serious prophecies to Archbishop Duncan-Williams that bordered on the latter's personal life.

He said the Archbishop took the said prophecies seriously and even consulted him on the best way forward.

Doomsday Prophets
In the heat of the raging debate on what Owusu-Bempah had said about President Mahama, the Archbishop, on Sunday, told his congregation at the Spintex Road they should disregard doomsday prophets who put out prophecies about the death of a sitting president.

The Archbishop did not mention the name of Owusu-Bempah but told his congregation, 'The thing that you must always look out for when you see all these prophets prophesying all kinds of doom on the internet against the President…is to ask yourself does [the Prophet] have honour, credibility, character and integrity?

Where did he come from? Who trained him? How long has he been on the scene? Who laid hands on him? Whose product is he? At whose feet did he study? Who groomed him? Who covered him? Who was his teacher? Who taught him?'

In a related development, Rev. Owusu-Bempah has also fired back at Bishop Charles Agyin-Asare of Word Miracle Church against his conduct and style of handling the said prophecy about the death of the President.

Bishop Agyin-Asare had publicly stated that even if the claim was true, it was specifically meant for the President so it was 'ministerially unethical' and 'scripturally wrong' for Rev. Owusu-Bempah to have gone public and told the media about it.

The Bishop said Rev. Owusu-Bempah should have tried to contact the president in person or at least reached the President's pastor over the matter, especially as he had said prayers were necessary to intercede on the president's behalf.

But in a sharp response, Rev. Owusu-Bempah told Peace FM that Bishop Agyin-Asare was 'ignorant of what the Bible says'.

'What does he mean by it is not scriptural? He is not making sense at all; it is absurd. Should we not pray if God has revealed to redeem. What will be my benefit if the President dies?

I don't understand why the issue is being politicised. I will not listen to what they are saying because they are not spiritual people. I will continue to pray for the country…'

With intense prayer on Radio Gold, Bishop Agyin-Asare declared that 'by the authority vested in me as a prophet and an apostle to the nations and also as one of the spiritual watchmen at the gates of this nation and with the authority of Heaven behind me, I declare that President John Mahama will not die a premature death before his time but he will live to declare the works of God'.

However, this rather opened the floodgates for a fierce battle between the pastoral gurus in the country.

But a clearly peeved Rev. Owusu-Bempah said if Bishop Agyin Asare had critically studied the Bible and the ways of God, he would not have come out with such comments.

'When the deaths of former President Mills and Alhaji Aliu Mahama happened, these same people accused me of delaying in coming out with that prophecy, so why should he condemn it when I have come out to say it…They are not prophets and so they should keep quiet – God spoke to me and that is what I said…'

Rev. Owusu Bempah had been caught in several controversies over his pronouncements in the past. Earlier, he had prophesied the death of the late President John Atta Mills and former Vice President Aliu Mahama in 2012, as well as a plane crash on December 31, 2011.