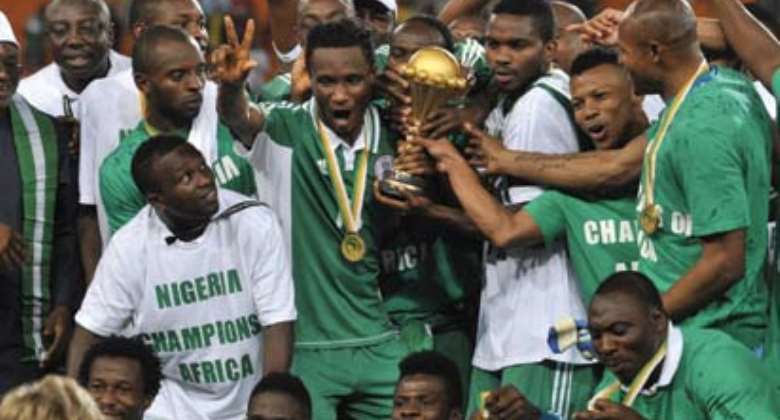 The purported and ceremonious resignation of the Chief Coach of the Super Eagles of Nigeria, Stephen Keshi, after land sling victory and breaking the 19 years jinx of African Cup of Nations (AFCON) which Nigeria won the Nations cup indicated that the Coach has read between the lines of the Nigeria Football Federation (NFF).

Nobody in Nigeria ever envisaged that the African Cup of Nations hosted in South Africa this year would be won by the Super Eagles due to their early and previous poor performances in the competition which many tagged Super Eagles as 'Super Chickens'.

It is of years that many Nigerians lost interest in Super Eagles as a result of recurring poor performances in local and international football competitions which prompted many Nigerians to be interested with foreign football leagues and nothing else.

Since Nigeria Super Eagles lost international recognition for poor performances when I personally lost interest in watching Nigeria football but Stephen Keshi regurgitated my passion for Nigeria National team after the overwhelming victory few days ago in South Africa. Ever since 1945 when Nigeria Football Association (NFA) which was formerly called and was established and later changed to Nigeria Football Federation (NFF) recently.

Though Football competitions were initiated by one British man, Baron Milford who groomed young players then for weekly marches between European and Nigerian youths in Lagos. Since then, Nigeria has recorded several successes and trophies in local and international football competitions varying from Federation International Football Association (FIFA), CAF, AFCON and others.

After Independence Nigeria started participating fully International football competitions which Super Eagles was formerly called as Red Devils and later Green Eagles but finally nicknamed as 'Super Eagles'. Nigeria has participated severally in African Cup of Nations and won the Cup thrice and reached finals of their games and also lost participations in some of the competitions for unable to qualify for their marches.

Not just African Cup of Nations but won junior world Cups and others. To the extent that Super Eagles were banned from participating in International Competition by Joseph Sepp Blatter, the FIFA president and was later lifted after few days. The move was pioneered by Footballers Association of Nigeria for grossly marginalization of foreign referees.

Instead of NFF to look at the performances of the Super Eagles at the AFCON and inability for any Nigerian to be among the foreign referees but mounting pressure of employing the service of foreign coach for selfish motive and nothing more.

Again, Football administration has continued to move at apace as well. At first, Football administration was autonomous until the Decree 34 of the early 1970s that placed NFF under the National Sports Council (NSC). In the 1990s, the Decree 101 came along to reinforce that. Despite that NFF has invited several foreign coaches to groom the Super Eagles only one of the foreign coaches, Westerhof was able to make Super Eagles won the 1996 Atlanta Olympic. For FIFA rankings few years ago, Nigeria national team was at the top of African countries and the world until the sudden collapse of the Super Eagles and over –dependence on foreign players and coaches for rescue of the team knowing well that home based players make better team.

Many commended Stephen Keshi for using home based players to bled with the foreign ones. In spite of the largesse promised by the Federal Government, corporate bodies and individuals, the former Head coach was not carried away because he is a focused person to the core.

Now that Super Eagles has won the trophy in midst of great African countries like Egypt, Ivory Coast, Ghana,Zambia,Mail, Sudan, Tunsia and others. The National team would definitely increase its rankings in 2013 with the huge performance in the last AFCON.

The former appointment of Stephen Keshi as a head coach of the National team with the support of other local team advisers was greatly applauded to some extent, though the acronym of prophets are not honored in their home towns according to the Holy Bible played a significant role on Stephen's appointment until he shocked many of tendering his premature letter of resignation for envisaging the future of NFF towards him especially the greedy officials who want to rubbish his career at all costs.

Even the professed NFF officials at the glass house never thought that Keshi would win the trophy for Nigeria in order to find a cruel means to nail him but on the other hand, Keshi is a well trained coach to the core who has professionally coached local and international clubs together with some of the African National Teams like Togo, Mali and others Some of the NFF officials envisioned that only foreign coaches can give Nigeria National Team the best coaching of young and old players in the country.

However, bringing foreign technical adviser would help to build the sports ministry but will must train our local coaches to be measurable to the foreign ones. The major problem of the NFF is that local players are not groomed rather focusing on foreign based players to play for the national team.

We have talented local players wasting at some local communities in Nigeria like Ajegunle, Orile,Obalende, Ikoyi, Mushin, and just mention but a few. Some of our celebrated footballers today in Nigeria were all from Ajegunle and others.

Nevertheless, the Golden Eaglets, Super Falcons, supporters club and other foreign football bodies have impressively done well in their various participations in local and international tournaments.

The national leadership of Nigeria has abysmally failed to appoint Minister of Sports that is not a sport enthusiast rather seeing Sports administrators with pot bellies with no exercise. Sports bring unity of a country together in all ramifications.

Even Sports Writers Association of Nigeria (SWAN) time without number has written several articles to correct the rot in sports administration in Nigeria yet nothing has been done to fix the system. Apart from Football, there other sports activities in Nigeria that are grounded with no amiable solutions while talents are not groomed for future sports competitions. Most of the key positions of sports ministry in Nigeria are given to amateurs than experts whom Keshi refers to half-baked sports' administrators.

The Super Eagles' victory on just concluded African Cup of Nations could be traced to local coaches where Stephen Keshi brought some local players to join the National team instead of bringing only foreign based players The standard of international competitions cannot be comparable to African Football but many of these African players are playing in foreign leagues which make them relevant in their national team.

35 percent of Nigerian players are playing in foreign leagues which make them more exposed to international competitions and coaches. Our local leagues cannot pay our local players which make some of them to leave Nigeria for foreign clubs and others.

It is not a crime to bring foreign technical adviser to join the national team but some of the top NFF cabals will use such apple opportunity to amass wealth for themselves and make regular foreign visits to search for foreign coach without considering the future implications.

Keshi's resignation would bring absolute retrogression in the national team which he only built for five months before the competition and to re-start by a new coach especially foreign one. The NSC must start grooming young players from the primary, secondary schools, nation's universities and local clubs or leagues in Nigeria rather than searching for already made players in foreign countries.

Some of the best African teams usually use their local coaches but in Nigeria the reverse is the case.

Some schools of thought assume that Keshi's victory in the last Nations Cup would not make some dubious administrators of sports in Nigeria to make their ill-gotten wealth through the service of foreign coach with huge salary payment. If Nigeria Football Federation decides to send out local coaches for foreign trainings could help to bring the standard of Nigeria Football to a level where all Africans we look up to Nigeria for advice and even patronize local leagues.

Even no Nigeria TV stations could broadcast the Nations Cup competition for high payment to LOC.NFF is one of the corrupt Football institutions that needed intellectual overhauling and cleansing from the rot of evil men in the land.

The huge amount money being budgeted annually for the sports ministry is yet to make impact in the system rather glorifying perpetual corruption among sports officials. Even Keshi's resignation could also be traced to bringing a foreign technical adviser where his position would be digitally silent while attention would be focused on the latter than former.