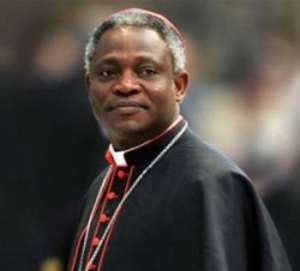 Pope Benedict was reported to have told Cardinals of the Roman Catholic Church at the Vatican City in Rome, Italy, that 'strength of mind and body are necessary, strength which in the last few months has deteriorated in me to the extent that I have had to recognize my incapacity to adequately fulfill the ministry entrusted to me.”

At 78, the former Cardinal Joseph Ratzinger from Germany was one of the oldest new popes in history when elected.

The reasons behind the Pope's surprise resignation have yet to emerge.

But hours after the decision was made public, the name of his Eminence Cardinal Turkson, who is the current President of the Pontifical Council for Justice and Peace, started floating as a possible candidate for the position.

Irish Bookmaker Paddy Power, known for its controversial advertising campaigns and betting markets, put out a list of individuals who are likely to succeed the Pope, with Cardinal Turkson topping the list of names as the favourite.

Cardinal Turkson was once quoted as saying, 'If God would wish to see a black man also as pope, thanks be to God”.

The Catholic Church chronicler, Rocco Palmo, also referred to Cardinal Turkson as the lone Scripture scholar in the Pope's “Senate” and believes that his status as a potential “papabile” has been elevated due to his appointment as spokesman for Second Synod for Africa in 2009.

If either Cardinal Francis Arinze or Cardinal Peter Turkson is elected, the person would go down in history as the first black Pope.

The bookmaker however described Cardinal Peter Turkson as 'the early market leader at 7/2' who speaks and understands not less than six languages among which include Latin and Greek and commands a lot of respect and support among his peers.

According to one of the Paddy Power lads who has his finger on the Catholic pulse, Cardinal Marc, who has experience of working in Latin America, is a friend of Benedict and is apparently outgoing and charismatic.

At 64, Marc is said to be about the right age but could be seen as too young.

THE SEARCH
Roman Catholic cardinals seeking a successor to Pope Benedict XVI will hold a conclave to elect a new pontiff.

Only cardinals are eligible to take part in the conclave, which will continue until a successor is chosen.

The cardinals will meet in the Vatican's ornate Sistine Chapel and hold two voting rounds a day until they choose a new pope with a two-thirds majority.

They are traditionally locked into the Chapel, best known for the frescoed ceiling and altar wall painted by Michelangelo, and not allowed out until they choose a new pontiff.

Hitherto, they had to sleep in makeshift cells and share minimal sanitary facilities.

But new regulations issued by Pope John Paul II in 1996 allow them to live in a new hotel built on Vatican grounds behind St. Peter's Basilica and even take walks in the tiny state's peaceful gardens between their voting rounds.

The Letter
Pope Benedict's resignation letter:
Dear Brothers,
I have convoked you to this Consistory, not only for the three canonizations, but also to communicate to you a decision of great importance for the life of the Church.

After having repeatedly examined my conscience before God, I have come to the certainty that my strengths, due to an advanced age, are no longer suited to an adequate exercise of the Petrine ministry.

I am well aware that this ministry, due to its essential spiritual nature, must be carried out not only with words and deeds, but no less with prayer and suffering.

However, in today's world, subject to so many rapid changes and shaken by questions of deep relevance for the life of faith, in order to govern the bark of Saint Peter and proclaim the Gospel, both strength of mind and body are necessary, strength which in the last few months, has deteriorated in me to the extent that I have had to recognize my incapacity to adequately fulfill the ministry entrusted to me.

For this reason, and well aware of the seriousness of this act, with full freedom I declare that I renounce the ministry of Bishop of Rome, Successor of Saint Peter, entrusted to me by the Cardinals on 19 April 2005, in such a way, that as from 28 February 2013, at 20:00 hours, the See of Rome, the See of Saint Peter, will be vacant and a Conclave to elect the new Supreme Pontiff will have to be convoked by those whose competence it is.

Dear Brothers, I thank you most sincerely for all the love and work with which you have supported me in my ministry and I ask pardon for all my defects.

And now, let us entrust the Holy Church to the care of Our Supreme Pastor, Our Lord Jesus Christ, and implore his holy Mother Mary, so that she may assist the Cardinal Fathers with her maternal solicitude, in electing a new Supreme Pontiff.

With regard to myself, I wish to also devotedly serve the Holy Church of God in the future through a life dedicated to prayer.

HISTORY
Pope Gregory XII was the last pope to resign, standing down in 1415.

His resignation ended the Western Schism when different branches of the Catholic Church claimed supremacy from 1378 until 1417.

Initially, there were two rival popes, each with their own following, cardinals and administrative offices, according to Encyclopaedia Britannica.

The problem arose following the death of Gregory XI, an Avignon Pope.

When the College of Cardinals met to vote for a new pope a Roman mob broke into the voting chamber and forced the election of an Italian pope – Urban VI.

Unhappy with being cornered, some cardinals returned to Avignon where they elected Clement VII as the pope.

This forced followers in Europe to choose allegiance between Avignon and Rome.

Until 1409, there were two popes simultaneously, although the Avignon Popes (Clement VII and then Benedict XIII) were seen as antipopes.

Cardinals allied to Gregory XII and Benedict XIII decided to try and resolve the situation by getting the pope and antipope to meet and make an agreement.

However, at the last minute they pulled out and it was decided at a church council in Pisa that they would elect another pope – Alexander V.

He died shortly after being elected and was succeeded by John XXIII.

To resolve the situation the Council of Constance managed to get Pope Gregory and Antipope John to resign so a new election could take place.

As he refused to step down, Avignon Pope Benedict XIII was excommunicated and his successor, Antipope Clement VIII resigned in 1429 in recognition of the Roman Pope Martin V's legitimacy to the papal throne.

The only others to resign are Marcellinus, who abdicated or was deposed in 304 after complying with the Roman emperor's order to offer sacrifice to the pagan gods; Benedict IX, who resigned in 1045; and Celestine V, who stepped down after five months as pope in 1294.

Biography Of Cardinal Turkson
Cardinal Peter Turkson, a Ghanaian, is president of the Pontifical Council for Justice and Peace. He has been considered 'papabile' since he was appointed to this post by Benedict XVI in 2009 amid speculation that the next pope would probably be from Africa as part of the Catholic church's attempts to modernise and reach out to a huge Catholic congregation from the Sahel southwards.

Peter Turkson was born in western Ghana to a Methodist mother and Catholic father. As a boy in the seminary, he was considered far too boisterous to be content in a contemplative, solemn career in the church.

But he was reportedly begged by his mother to knuckle down and study hard to become a priest, and he did so well he was chosen to move to the US to study at St Anthony-on-Hudson Seminary in Rensselaer, New York, and he was ordained as a priest in 1975.

Returning to Ghana, he became a professor at St Teresa's Seminary, near where he grew up, and dedicated himself to academia as well as performing pastoral work in the local area.

In 1992, he was appointed Archbishop of Cape Coast by Pope John Paul II and served as president of the Ghana Catholic Bishops' Conference from 1997 to 2005.

It was during this time, in 2003, when Pope John Paul made him the first ever Ghanaian cardinal and his influence was extended by Pope Benedict XVI, who appointed him president of the Ponitifical Council for Justice and Peace, a role which sent him around the world mediating in countries such as the Ivory Coast in 2011.

In October of that year, he called for the establishment of a 'global public authority' and a 'central world bank' and has come out in favour of a Robin Hood-style tax on large financial transactions. When he visited Britain with Pope Benedict in 2010, he was singled out as a possible successor.