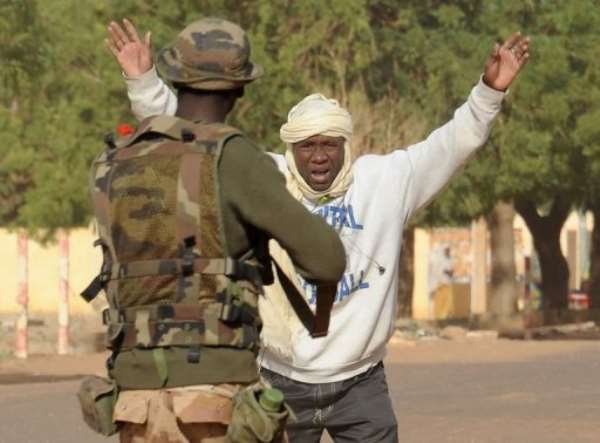 A French attack helicopter destroyed the central police station in Gao in a pre-dawn assault, after rebels from the Movement for Oneness and Jihad in West Africa (MUJAO) hiding in the building opened fire on Malian troops Sunday, sparking an hours-long street battle.

Soldiers later evacuated the city's main market, which is near the police station.

"We fear an attack, that is why we are evacuating the Gao market for security reasons," said a high-ranking officer.

A French team was demining the debris from the police station.

Soldiers closed off the streets around the building, which was destroyed in the attack, the remaining facade riddled with pockmarks from heavy machine gun rounds and shell fire.

One witness to the helicopter attack said an Islamist fighter inside the building had blown himself up.

An AFP reporter said body parts were lying in the debris.

MUJAO has claimed Sunday's guerrilla attack and a pair of suicide bombings Friday and Saturday, underlining the threat of a deepening insurgency in the former French colony.

France launched its operation on January 11, responding to a cry for help from Mali's interim government by sending fighter jets, attack helicopters and ground troops to battle Islamist rebels who had seized control of the north for 10 months and were advancing into southern territory.

The campaign racked up a string of early successes as French and African troops drove the extremists from Gao, Timbuktu and the rest of the towns under their control.

But the turn to suicide attacks, landmine explosions and guerrilla fighting show the deep security problems still facing Mali -- and by extension France, which is eager to wind down the operation and hand over to a United Nations peacekeeping mission.

Paris announced last week it would begin bringing its troops home in March, though President Francois Hollande -- who received a hero's welcome when he visited Mali at the beginning of the month -- has promised to stay as long as necessary.

It started early in the afternoon when Malian soldiers clashed with Islamists in the city centre, near the governor's offices and the police station, which the rebels had used as the headquarters of their "Islamic police" until French-led forces recaptured Gao on January 26.

A witness said the gunmen had hidden in the empty police station then attacked Malian soldiers when they arrived, as snipers positioned in surrounding buildings opened fire.

He said that after a fierce gunbattle, French troops had intervened.

Residents ran for cover as Kalashnikov bullets and 14.5-millimetre rounds pierced the air.

Rocket-propelled grenade explosions and fire from heavy machine guns and light weapons resounded late into the afternoon before dying down in the evening, when a power cut plunged the city into darkness.

One security source said several dozen insurgents had been involved in the attack.

Claiming the attack, MUJAO's spokesman Abou Walid Sahraoui said: "The combat will continue until victory, thanks to God's protection.

"The mujahedeen are in the city of Gao and will remain there."

Sporadic gunfire could be heard coming from the north of the city Monday.

Mali imploded after a March 22 coup by soldiers who blamed the government for the army's humiliation at the hands of north African Tuareg fighters, who have long complained of being marginalised by Bamako.

With the capital in disarray, Al-Qaeda-linked fighters hijacked the Tuareg rebellion and took control of the north, imposing a strict vision of Islamic law and punishing offenders with public whippings, amputations and executions.