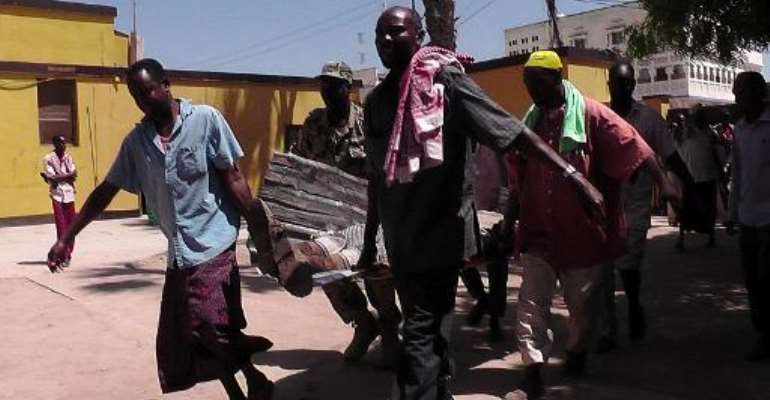 Rescuers shift a victim on November 19, 2013, following an attack by Somalia's Shebab suicide commandos in the central Somali town of Beledweyne, claimed by the Al-Qaeda-linked Shebab. By (AFP)

Witnesses reported bodies strewn around the blast site, the latest in a string of bombs and shootings in the central Somali town of Beledweyne claimed by the Al-Qaeda-linked Shebab.

"We have confirmed 16 people dead including soldiers and civilians, while others were injured, some seriously," senior Somali army officer Abdi Mohamed Ali told AFP, adding that four Shebab gunmen had also been killed.

The Shebab boasted of killing 20 soldiers, including Somali forces and Djiboutian troops with the African Union (AU) force and Ethiopian soldiers based at the police compound.

"Several of our special mujahedeen commandos carried out the attack on the military base in Beledweyne... they have killed many of the enemy," local Shebab commander Sheikh Mohamed Abu Suleiman told AFP.

Shebab spokesman Abdulaziz Abu Musab, who said one attacker blew himself up in a car at the gate before gunmen entered the compound, reported that the insurgents had "killed mainly Somalis but also some Djiboutians", and called the attack a "victory".

Witnesses said the car rammed the gate of the police station before bursting into a huge ball of flames.

"The car hit the gate of the police station and exploded, then after the explosion men with machine guns stormed the building. There was lots of shooting," said Hassan Nur, who saw the attack. "I saw several bodies lying around the area where the car blew up."

"Al-Shebab wants to terrorise the people, while the government is bringing peace and stability to Somalia," he said in a statement.

Prime Minister Abdi Farah Shirdon called the Shebab the "enemies of peace", who offered "nothing but indiscriminate violence and suffering to innocent Somalis".

AU special representative for Somalia Mahamat Saleh Annadif "strongly condemned" the attack, but made no comment on any possible casualties among the AU force.

Last month a suicide bomber killed at least 15 people in an attack on a popular restaurant in the town, which lies close to the border with Ethiopia and is under the control of pro-government Somali forces.

The Shebab also said they carried out the restaurant bombing, saying they were targeting Ethiopian troops and soldiers from the AU mission stationed in the town.

Beledweyne, which lies some 300 kilometres (185 miles) north of Mogadishu, holds a strategic position commanding the road to the capital.

The Shebab have been driven out of fixed positions in Somalia's major towns, including Mogadishu and the southern port of Kismayo, by the UN-mandated AU force of more than 17,000 men.

However, the group still controls large swathes of southern Somalia and continues to launch brazen attacks including suicide bombings and commando raids.

Many of the worst attacks have been in the heart of the capital, such as a car bomb earlier this month at a popular hotel that killed at least four people, including one of Somalia's top diplomats.

In September the group also claimed responsibility for a massacre at the upmarket Westgate shopping centre in the Kenyan capital Nairobi that left at least 67 dead.

The latest attack comes as the AU force in Somalia awaits an important troop boost of more than a quarter to 22,000 men, approved this month by the UN Security Council as part of efforts to step up offensive operations against the Shebab.