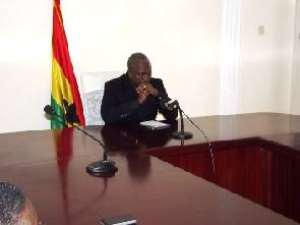 I just finished reading Mr. Andrew Solomon's article titled "Mahama's Gay 'Pal' Writes: In Bed With the President of Ghana?" sourced to the New York Times by Ghanaweb.com and could not stop myself from laughing (2/9/13). I could not stop myself from laughing because the author grossly underestimates the depth and breadth of the abject intellectual and moral obtuseness that invariably attends the indisputably "natural" question of homosexuality in Ghana and much of Africa.

Consequently, even while writers like me have had ocassion, time without number, to rather casually describe the largely lynchmob mentality that attends the recognition of both the veritable existence and practice of homosexuality as "a raging debate," in reality, what prevails is absolutely no "debate," whatsoever, but a seemingly endless bouts of primitive shouting-matches between the rabidly homophobic and those who, in principle, do recognize the genetic or natural reality of homosexuality without necessarily staking out any moral and/or entrenched political postures on this question one way or another.

Like President Barack H. Obama, I find myself wistfully positioned somewhere on the boundary between the major "debaters," in much the same way that Nana Oye Lithur, the renowned Ghanaian human and civil rights activist who wa recently named to the newly designated cabinet post of Minister of Gender, Children and Social Protection, finds it imperative to staunchly defend the rights of people of LGBT orientation to decently, quietly and peacefully lead their lives undisturbed by the self-appointed anti-gay Taliban jihadists.

What makes the Ghanaian situation unpardonably revulsive is the abject lack of leadership from people like President John Dramani Mahama whose political legitimacy, by the way, has yet to be definitively determined by the august Ghanaian Supreme Court. In essence, Mr. Solomon is not quite accurate in rather casually observing that Mr. Mahama successfully clinched the presidency in the country's December 2012 general election.

You see, if one wants to fully appreciate the pathological deceitfulness and abject hypocrisy of Mr. Solomon's highly placed Ghanaian friend, one may have to begin with the intricate concatenation of criminally corrupt processes that culminated in Ghana's least democratic general election in twenty years. Mr. Solomon may also have to thoroughly examine his so-called friendship with the Ghanaian leader who recently went on public record as claiming homosexuality to be a criminally culpable offence.

On the latter score, I am rather amused than surprised that in one breath President Mahama would be mordantly damning "good friends" like Mr. Solomon as "criminals," and in the next breath be doubling over with dramaturgical remorse and profusely "apologizing" to these same "criminals" for calling them as such. Does this sound like the kind of urbane behavior that the clinically sane would sport? Come on, help me on this one, my dear reader!

And just what was Ghana's legally embattled president thinking when he made the retrospectively curious decision of paying a visit to the home of a personality whose well-known sexual orientation he unreservedly deemed to be utterly repugnant and criminal? I think Ghana's Fourth-Republican Constitution leaves absolutely no room for doubt vis-a-vis the mental state of who best qualifies to govern our beloved country.

Indeed, in one of his celebrated literary pieces, the immortalized African-American gay civil rights activist and author James Baldwin (1924-1987) makes the following critical observation about the veritable neurosis - or cinical madness - that is the personality disorder of White-Americans who are rabidly racist against their African-American compatriots. According to Baldwin, the very expression of racism invariably reflects the abjectly poor and revulsive relationship that the White racist has with him-/herself:

"The question of color takes up much space in these pages, but the question of color, especially in this country, operates to hide the graver questions of the self." We hope that pathologically homophobic Ghanaian leaders like Mr. Mahama will eventually mature morally and intellectually to fully appreciate the scapegoating chimera that is the purported homosexual menace.