Mali on edge after suicide attack 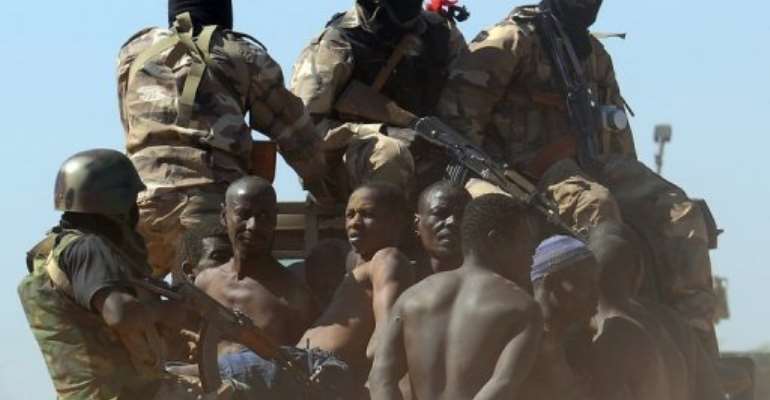 Malian soldiers transport a dozen suspected Islamist rebels on February 8, 2013 after arresting them north of Gao. By Pascal Guyot (AFP/File)

Residents of a village near Gao, the largest city in the north, detained two youths they said were wearing explosive-rigged belts and travelling on the same road where the suicide bombing on Friday wounded a soldier at a checkpoint.

"We arrested two young men early this morning. They had explosive belts and they were riding on two donkeys," Oumar Maiga, the son of the local village chief, told AFP.

He said the pair, an Arab and a Tuareg, were detained some 20 kilometres (12 miles) north of Gao.

Soldiers and paramilitary police guarding checkpoints in Gao cut down trees to increase visibility, dragged sandbags in front of their positions and set up heavy machine guns in an effort to protect themselves from attacks.

In Friday's blast, the bomber rode a motorcycle up to an army checkpoint and detonated an explosive belt, wounding one soldier, an officer said.

The young Tuareg, dressed as a paramilitary officer, was also carrying a larger bomb that failed to detonate.

The Movement for Oneness and Jihad in West Africa (MUJAO) claimed the attack and vowed to carry out more against "the Malian soldiers who chose the side of the miscreants, the enemies of Islam".

MUJAO is one of a trio of Islamist groups that occupied northern Mali for 10 months before France sent in fighter jets, attack helicopters and 4,000 troops to drive them out.

The French-led operation, launched on January 11 as the insurgents advanced toward the capital, has succeeded in forcing the Islamists from the towns under their control.

But they are thought to retain a presence in the vast desert spaces of the country's north and France is now anxious to hand over the operation to United Nations peacekeepers amid fears of a prolonged insurgency.

Two Malian soldiers and four civilians have already been killed by landmines, and French troops are still fighting off what Paris called "residual jihadists" in reclaimed territory.

Some villages around Gao, 1,200 kilometres (750 miles) northeast of the capital Bamako, continue to support the Islamists, French and Malian security sources say.

"As soon as you go more than a few kilometres outside Gao, it's dangerous," a Malian officer told AFP.

Despite the success of the French operation, Mali's state and military remain weak and divided, a situation highlighted by a gunfight Friday in Bamako between rival army troops.

The firefight erupted after paratroopers loyal to ex-president Amadou Toumani Toure -- who was ousted in a March 2012 coup that eventually enabled the Islamist takeover -- fired into the air to protest an order absorbing them into other units to be sent to the frontline.

Two adolescents were killed and another 13 people wounded in the clash at the paratroopers' camp, state media said.

Interim president Dioncounda Traore reprimanded the military over the incident.

The fighting overshadowed the arrival of 70 EU military trainers, the first of what is to be a 500-strong mission tasked with whipping the Malian army into shape.

French General Francois Lecointre, leading the mission, said there was "a real need to rebuild the Malian army, which is in a state of advanced disrepair".

The nation imploded last year after the coup, waged by soldiers who blamed the government for the army's humiliation by a rebellion among the Tuareg, a North African people who have long complained of being marginalised by the south.

With Bamako in disarray, Al-Qaeda-linked fighters hijacked the Tuareg rebellion and took control of the north, imposing a brutal form of Islamic law.

French special forces and Chadian troops on Friday secured the strategic oasis of Tessalit, near the Algerian border in the far northeast, and sought to flush the Islamists out of hiding in the Adrar des Ifoghas mountains, where they are believed to have fled with seven French hostages.

US State Department spokeswoman Victoria Nuland urged countries not to pay ransoms to free their hostages, after a former US ambassador to Mali estimated that Western countries had paid as much as $89 million from 2004 to 2011 in ransom payments to the militants French troops are now fighting.

Paying ransoms is "just feeding into the coffers of the terrorists", Nuland said.