'Africa needs to hold onto values that will promote development' - Obasanjo 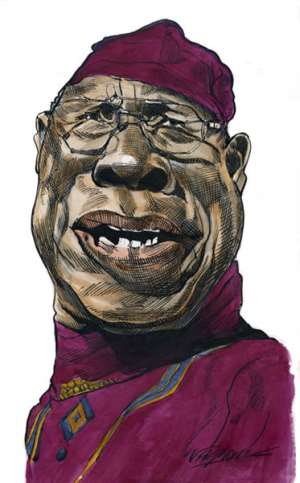 London, Feb 9, GNA - Former President Olusegun Obasanjo of Nigeria has stated that the only way Africa could advance and move at par with other continents was through adherence to values that promoted unity and development.

'We need to change our attitude of using negative tendencies that undermine our existence and create retrogression in the continent.'

Former President Obasanjo stated this when he launched the Olusegun Obasanjo Foundation at the Grosvenor House, Marriot Hotel in Central London on Friday night.

The Foundation would among other things address issues on girl-child education, non-communicable diseases, youth unemployment and nutrition and food security.

Former President Obasanjo said it was sad that while other continents had eradicated poverty and were moving onto other levels, the African continent was still struggling to acquire basic needs in their various countries.

He said over 200 million Africans were still wallowing in abject poverty, which was unacceptable in a continent that possessed adequate natural resources and could have been championing the world economic strides.

The Former Nigerian President said like Jesus Christ, he was touched by a Biblical verse 'And Jesus Christ went about doing good things' to set up the foundation for the underprivileged in society.

He expressed his appreciation to all the African presidents and the Business Community that attended the ceremony and gave the assurance that he would continue to work in tandem with them in order to achieve the goals of the Foundation.

Ms Anne Welsh, Chairperson of the Foundation, said it was aimed at becoming the African solution to the African problems in the coming years.