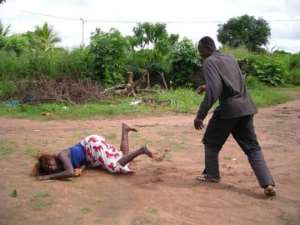 Speaking in an interview with the GNA, the Unit Commander of Madina Police DOVVSU, Assistant Superintendent of Police (ASP) Christine Srofenyoh, indicated that there were 325 assault cases, 18 cases of offensive conduct, and 40 cases of threats. Non-maintenance recorded 103 cases, abduction had 9 cases, while Indecent assault recorded 13 cases.

There were also 23 defilement cases, 6 rape cases, and one case of criminal abortion. Abandonment of children had 5 cases, with 22 cases of causing Unlawful Damage and one Child Stealing case.

The rest included unlawful removal of a Child, causing harm, defrauding by false pretences, unlawful entry, kidnapping, and exposing a child to harm.

ASP Srofenyoh said there were about 151 cases that were closed by her outfit, while 95 cases were sent to Court with two cases acquitted and discharged.  She explained that 15 cases were Convicted and 78 cases were under Trial while 373 case were Under Investigations as at the end of last year.

The DOVVSU Commander urged the general public to report all domestic cases to the nearest Police, and appealed to complainants to assist with Police investigations.

She also asked women who are victims of sexual abuse not to take their bath but have to report on time to the DOVVSU offices for further investigations.

ASP Srofenyoh reminded all such victims to preserve any available evidence such as torn panties and send them to the police to enhance the investigation process.