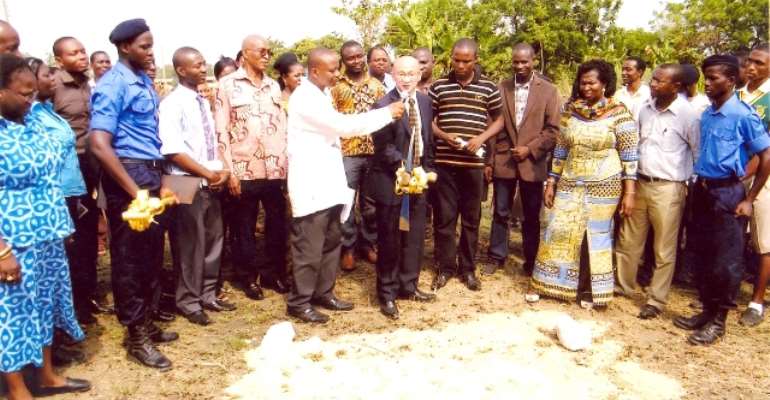 Winneba, Feb. 8, GNA - The Deputy Head of Mission at Japan embassy in Ghana, Mr Shi Gero Hamano, has said the government of Japan will continue to partner the government of Ghana to better the lot of the people.

He said this at a sod-cutting ceremony for construction of a boys' dormitory with master's flat for the Winneba Senior High School which Japan is funding at a cost of 235,400 dollars.

He said Japan collapsed after World War 11 but was able to rebuild through education especially investing in the human capacity building and appealed to the students to concentrate on their academic work to justify the resources being spent on their education.

The Head Mistress of the school, Mrs Cecilia Kwakyi Coffie, expressed her gratitude to Brig Gen Joseph Nunoo Mensah, National Security Advisor and Row Education and Programmes, a non-governmental organisation based in Accra through whose initiative the project came about.

Mr Wilson Odoom, Executive director of Row Education and Programme, thanked the Japan Embassy in Ghana for the gesture.

Brig.-Gen. Nunoo Mensah, an old boy of the school, expressed his appreciation to the government of Japan for partnering Ghana in its developmental programmes