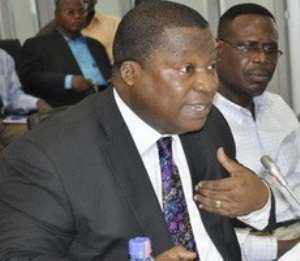 An attempt by Nana Akufo-Addo, New Patriotic Party (NPP) Presidential candidate in the December 2012 election and two others at getting results and collation forms of all two hundred and seventy-five Constituencies in the country, as well as the Electoral Commission (EC) declaration forms from all 26,002 polling stations nationwide from the commission has hit the rock.

The Supreme Court (SC) yesterday unanimously refused the request of the petitioners and dismissed it as unnecessary, as Nana Akufo-Addo, his Vice-Presidential Candidate, Dr. Mahamudu Bawumia and Jake Obetsebi-Lamptey, NPP National Chairman, challenging the declaration of President John Mahama as winner of the December 2012 Presidential result.

The court, presided over by Justice Atuguba, noted that the petitioners in their application have failed to impress the panel in granting their request.

The decision of the court followed a request by the Petitioners seeking permission from the court to retrieve from the EC, results/collation forms in 275 Constituencies as well as EC declaration forms from all 26,002 polling stations nationwide for inspection and to make photocopies of the documents.

Reading the ruling of the court, Justice Sophia Adinyira noted that the EC is the only mandated institution to conduct elections including Presidential Elections and also keep elections result materials up to a period of one year.

According to her, the collation results are public records that are kept by the EC with all political parties that took part in the in the December 2012 Election also having copies of all the documents.

The ruling further found as unnecessary, parties that already have copies of documents, still requesting the same documents from the EC for inspection, pointing out that the petitioners, in their application did not raise any issue on the duplicate they have in their possession.

The court further noted that the request of the petitioners was premature, adding that photocopies of document are admissible in court as it was indisputable that petitioners are in the possession of duplicate copies of the documents they are seeking from the EC.

It also pointed out that petitioners were well informed with the results and that it was based on documents in their possession that they mounted a case on allegations of election irregularities in the just ended December elections.

Counsel for the petitioners, Mr. Philip Addison had argued that the result formation forms and pink sheets are in the custody of the EC and that his clients are by law, entitled to request the forms and make copies.

It was his view that the petitioners had the Constitutional Right to request for public documents in the possession of the EC irrespective of whether they had copies or not.

Counsel for the EC, Mr. James Quarshie-Idun, however, opposed the request of the petitioner and further describing the demand as 'repressive and outrageous'.

According to counsel, the petitioners already have in their possession the documents they were seeking before the court to be provided to them.

Mr. Quarshie-Idun further noted that the petitioners by an affidavit before that court, swore that they have copies of the declaration form as well as the pink sheets, explaining further that results during elections were handled effectively by all party representatives and EC officials at the various polling stations before on-ward transmission to the returning officer.

Meanwhile, an application seeking to amend the petition before the court, increasing the alleged election irregularities affecting the results declared in the December 2012 election from 4,079 polling stations to 11,916 polling stations had been granted despite an opposition from the EC.

The court noted that orders that it previously directed at the petitioners to provide further and better particulars of their previously alleged irregularities in 4,079 polling stations to the EC, should be extended to cover the outstanding number of polling stations currently being sought.

The court further ordered that the amended petition should be filed within two days and further and better particulars should be filed and served on the President John Mahama, EC and the National Democratic Congress (NDC), who are respondents in the case, within seven days.

Arguing his application to amend the petition, counsel for the petitioners, Mr. Philip Addison noted that the request before the court was to correct errors in their previously amended petition and are seeking to make additional request.

Counsel pointed out that the amendment had become necessary due to discoveries of additional malpractices and irregularities that took place during the December 2012 elections bringing the numbers being complained of to 11,916 polling stations.

However, counsel for the EC, Mr. James Quarshie-Idun, opposed the request of the petitioners, arguing that the request being sought forms part of the 26,002 polling station results they sought to be provided, which was rejected by the court.