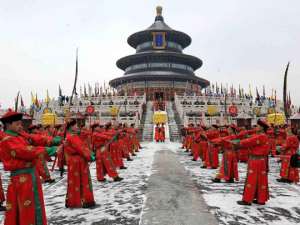 Performers dressed in costumes of the Qing Dynasty (1644-1911) act during a rehearsal of a performance presenting the ancient royal ritual to worship heaven at the Temple of Heaven in Beijing, capital of China, Feb. 5, 2013. The Temple of Heaven, used to be the imperial sacrificial altar in ancient China, will witness the heaven worship performance during the upcoming Spring Festival holiday. The Spring Festival, or the Chinese Lunar New Year, falls on Feb. 10 this year.

ACCRA Feb. 6 (Xinhua) - All Chinese people around the globe are going to celebrate their Lunar New Year or Spring Festival on Feb. 10 (Jan. 1 in China's Lunar Calendar). It is considered the Asian giant's version of Western Christmas but which has more socio-cultural rather than religious significance.

The Chinese Lunar New Year actually bears some semblance to some Ghanaian festivals such as the Akwasidae and Kente festivals of the Ashantis, Damba/Fire Festival of Dagombas of northern Ghana, 'Homowo' or Hooting at Hunger of the Gas of Accra, Hogbetsotso Festival of the Anglos of the Volta Region, and Munufie Kese (Yam) Festival of the Bonos of the Brong-Ahafo Region, which all have some legendary stories or tales woven around them.

TALE OF CHINESE LUNAR NEW YEAR'S ORIGINS
The Chinese Christmas or Lunar New Year, traditionally the most important and exciting holiday for Chinese people throughout the world, follows a similar trend. The origins of the Chinese Lunar New Year or Christmas go far back into ancient Chinese mythology and folktale.

In ancient China, it was held that a very elusive monster or dragon used to terrorize, haunt and kill Chinese children. This went on continuously until someone invented a bamboo device or gun packed with powerful explosives that detonated loudly and continuously, like the current 'knockout' explosives used at Christmas, to frighten off the monster.

This single act of invention this technology brought a great relief to the people of China because it liberated them from this strange monster. The people therefore deemed it necessary to celebrate this act of bravery, thereby giving way to the institution of the China Lunar New Year that also ushers in the Spring Season.

The actual date of the origin of Chinese astrology is not known. According to legend, the Yellow Emperor introduced the first cycle of the zodiac in 2,600BC to record the Chinese Lunar New Year.

Like the Western calendar, the Chinese Lunar Calendar is an annual one. The Chinese zodiac consists of a 12-year circle, each divided into 12 months. However, since most primitive people were illiterate, 12 animals were designated to symbolize the 12-year cycle. The lucky animals are the rat, ox, tiger, rabbit, dragon, snake, horse, sheep, monkey, rooster, dog and pig successively.

According to this sequence, 2013 is the snake year. So when you meet a Chinese friend, you can greet him/her with 'happy snake year'.

However, the animals representing the years have significant horoscopes meanings. Horoscopes have developed around the animal signs just like monthly horoscopes in the West were developed for the different moon signs -- Pisces, Aries, etc. For example, a Chinese horoscope may predict that a person born in the Year of the Horse is "cheerful, popular and quick to compliment others". The year of a person's birth is considered the primary factor in determining a person's personality, physical and mental attributes, ability and level of success and happiness throughout his or her lifetime. Events and occurrences in a given year are influenced by the nature of that year's animal.

Animal signs also have a useful social function for determining someone's age. Instead of asking directly how old a person is, the Chinese often ask about his or her animal sign, which places a person within a cycle of 12 years. This is a popular way to socialize.

CELEBRATIONS OF THE CHINESE LUNAR NEW YEAR
To the Chinese, the Lunar New Year is a time to welcome the Spring Season that brings the freshness and bloom of nature to the people. It is, indeed, a unifying event in which every Chinese national residing in any part of the worked cherishes to participate.

All over China, the Lunar New Year and Spring Festival or what is called "Nianwei" in Chinese - the festival taste - is said to be growing stronger and reaching fever pitch.

Like the Western Christmas celebrated in most parts of Christian Africa, China's Lunar New Year or Christmas is a very important occasion for all Chinese nationals throughout the world.

The Chinese celebration goes beyond mere celebration, as it unveils the numerous aspects of Chinese culture and social life.

For example, there is the Lantern feature of the celebration. On this occasion, large numbers of huge lanterns are decorated in nearly every place. The performers usually dress in costumes of the Qing Dynasty (1644-1911) and present the ancient royal rituals at the Temple of Heaven in Beijing, capital of China.

Another interesting feature of the Chinese Lunar New Year celebrations is the making of paper cuttings by citizens to greet the Spring Festival.

There will again be exhibitions showcasing Chinese works of art and ancient artifact. China has held some activities to herald the New Year. These include an underwater dragon dance at the Beijing Aqrium.

THE HOMECOMING AND TRAFFIC HEADACHE
Just like the western Christmas during which there is a large number of people travelling to observe the occasion, the Chinese New Year festivities bring together family members, friends and relations scattered throughout China and other parts of the world.

During the Spring Festival, every Chinese yearns to come home to join their families or travel with family members to join in the celebrations marked by a true advertisement of China's unique cultural traits.

Millions of Chinese residing around the country and outside therefore make frantic efforts to rush home early enough for the festival, resulting in a mad rush for train, bus and air tickets.

Already, it is said that 'a record 3.4 billion trips are expected to be made during the period, which runs from January 26 to March 6, 2013'. Travelling by any means thus becomes a major headache for most Chinese, as they struggle to reach home just in time for the New Year festivities.

The rail network, preferred by most Chinese, is expected to handle some 225 million trips, as families yearn for joint celebrations. Children are also expected to travel with their families during the Spring Festival to their hometowns and other places of interest.

One bothering aspect of this occasion is the traffic jam that characterizes air, road and train transportation, compelling many Chinese to purchase tickets in advance to avoid disappointment.

Road traffic was expected to hit a peak this Sunday (Feb. 10), with around 88 million passengers expected to travel by bus, according to He Jianzhong, spokesman of the Ministry of Transport.

He said on Sunday morning that stations nationwide had mobilized 860,000 large and medium-sized buses to meet the growing demand by waves of Chinese travelers.

The busy roads, together with poor weather conditions in some regions, have made the homeward trips quite an adventure for some passengers.

The National Meteorological Center forecast on Sunday that rain and snow will sweep most of central and east China in the coming three days, accompanied by temperature drops.

A record 3.41 billion trips are expected to be made over this year's Spring Festival travel rush, according to the National Development and Reform Commission, the country's economic planner.

At the beginning of the video message, Ban introduced himself in Mandarin Chinese.

"I am pleased to send my warmest greetings for the Lunar New Year," he said. "In this Year of the Snake, let us work together in harmony for peace, prosperity and a healthy planet. Happy New Year!"

The Chinese New Year festival is also celebrated not only in China but in other parts of the world, especially Africa.

Already, the festival fever is hitting some African countries such as Ethiopia where the China's Henan Art Troupe staged fascinating performances at the Ethiopian National Theater Hall last Friday night. It is the troupe's second show of its three-nation Africa tour.

The performances, which lasted more than two hours, were organized jointly by the Ethiopian Ministry of Culture and Tourism and its Chinese counterpart.

China and African countries agreed to expand cultural exchanges during the Forum on China-Africa Cooperation last July. This is particularly significant in this era of globalization where peoples of all continents and countries find themselves sharing knowledge, culture and technology.

Welcome to the China New Year and Christmas in China!