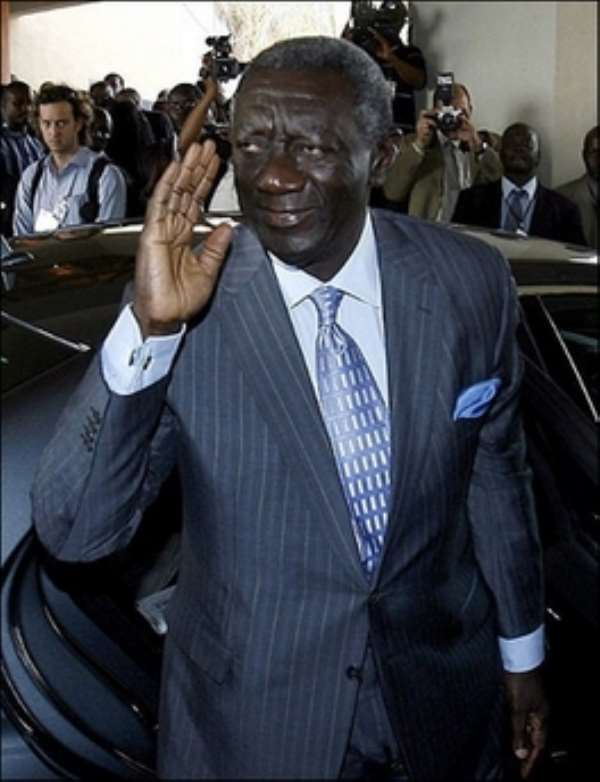 The much-awaited relocation of the presidency from the Osu Castle to the Flag Staff House took place yesterday, with the man who initiated the construction and completion of the modern edifice, former President John Agyekum Kufuor, conspicuously missing at the event.

This was in view of the fact that government and the State Protocol failed to give him prior notification.

Checks by DAILY GUIDE established that an invitation letter signed by the Director of State Protocol, Kwame Tenkorang-Asamoah, was dispatched to his Cantonments office, late Wednesday afternoon around 3:30pm.

Spokesman for the former President, Frank Agyekum, said “an invitation came in late yesterday afternoon when he had already left for Kumasi.”

By this time, Mr Kufuor was said to be airborne on a Starbow flight on his way to Kumasi, the Ashanti regional capital, for a funeral of a close relation and there was no way he could cancel the journey.

Interestingly, a press statement was issued and signed by Information and Media Relations Minister, Mahama Ayariga on Tuesday, February 5, 2013, announcing government's decision to hold what he described as “a short ceremony to commemorate the movement.”

This was what kept many wondering why government, and for that matter, the State Protocol, failed to inform Mr Kufuor earlier than the Wednesday afternoon, if they indeed wanted him to be part of the programme.

Confusion
The then opposition National Democratic Congress (NDC) had kicked against the construction of the presidential palace which they now decided to put to use, against the promise to make it a hen coop.

Among the several reasons they gave was that it was a waste of the country's resources and that it was not safe for a President to stay there, in view of its proximity to Nima, a Muslim-dominated community in Accra.

At a point a member of the NDC said the plush mansion was best fit for a piggery or a poultry farm, with the late President John Evans Atta Mills himself vowing never to use the edifice.

The name of the presidential palace was subsequently changed from the 'Jubilee House' that the Kufuor administration branded it, to the old name, Flagstaff House.

The facility was however left for several years without use and any maintenance work thus leading to its ruin.

At a point, the Mills government claimed to have spent a whopping GH¢121,443.71 on renovation works on the Flagstaff House even though he declined to work or live at the place.

This included an amount of GH¢ 48,956.99 spent on fumigation alone with GH¢41,554.57 on maintenance and repair of central air-condition systems, GH¢26,291.15 for maintenance and servicing of generators and minor renovation works on electrical fittings and GH¢ 4,641.00 on supply and installation of air-conditioners and rerouting of server rooms.

But yesterday, an obviously elated President Mahama could not hide his joy, indicating that “today, I am pleased to announce the relocation of the Presidency and the seat of the government of Ghana from the Christianburg Castle, Osu, to the Flagstaff House, in keeping with an earlier promise I made to the nation.”

He claimed that the delay to move into the Flagstaff House when the previous NDC administration took office was to enable government to rectify some defects on the facility.

President Mahama said one month was used to address the security concerns which he failed to elaborate.

However, he said he was not moving into the residency for now, adding that his administration would need three months to fix and make it habitable.

Therefore, the President would be working at the Flagstaff House but would not live there until the completion of work on his residence.

President Mahama said the Osu Castle would be opened to the public once he moves out.

He said the public would then have access to the colonial edifice, which they would also be allowed to photograph.

He described the relocation as the closure of a chapter of Ghana's history and the dawn of a new era.

The Osu Castle, which some say symbolised Ghana's triumph over imperialism, has been the seat of government for over five decades.

Security officials have often prevented ordinary citizens from approaching or loitering around the structure and photographing it was similarly forbidden.

But the President said Ghanaians would be able to visit the site and take photographs once the Castle was open to the public.

“As a transitional measure, some presidential staff and some activities of government will continue to be held at the Castle in the short term until the Ministry of Foreign Affairs and Regional Integration completes its movement to its new headquarters and the relocation committee is able to finalize its work,” he stated.

He added, “Without pre-empting the final recommendations of the Relocation Committee, it is my hope that the castle and the adjoining Asomdwee Park will, in the near future, be open to the public and photographic activity in and around it will be allowed so Ghanaians can have a glimpse of the edifice.

“The Castle is a store house of rich history from the era of slave trade to our pre and immediate post colonial period and also provides us with a glimpse into the history of our immediate past presidents and other leaders before them.

This will be of immense interest to both local and international tourists. It is a place to unearth a portion of our rich presidential history that has remained secluded from the general public,” he added.