Akufo-Addo Vs. John Mahama: All Set For Trial 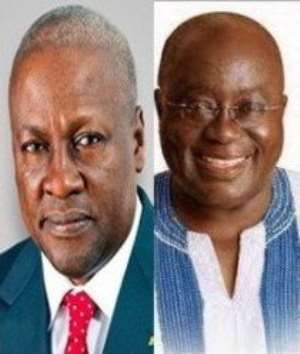 The Supreme Court yesterday ruled that it will not order the Electoral Commission (EC) to supply three petitioners challenging the validity of the election of John Dramani Mahama as President, with Results Collation Forms from 275 Constituencies and Declaration Forms Pink Sheets from 26,002 polling stations.

There were also indications that by the close of the month the court would go into full trial.

The unanimous decision, however, was a subtle validation of the petitioner's request since the court affirmed the EC's argument that the petitioner's party, New Patriotic Party (NPP) and all others in the election were given copies of the documents during the December 7 & 8, 2012 general elections and could not turn around to claim them.

Additionally, the nine-member panel presided over by Justice William Atuguba granted the petitioners' application seeking leave of the court to amend the petition and add more polling stations.

As it is now, the petitioners, NPP presidential candidate Nana Addo Dankwa Akufo-Addo, his running mate, Dr. Mahamudu Bawumia and the party's Chairman, Jake Otanka Obetsebi-Lamptey, had been allowed by the highest court of the land to add 7,107 polling stations to the original 4,709 polling stations filed.

The total number of polling stations now stands at 11,916 where the petitioners claim was “vitiated by gross and widespread irregularities and/or malpractices which fundamentally impugned the validity of the results.”

The court finally dismissed another application filed by the 3rd respondent (National Democratic Congress – NDC) asking for certain further and better particulars from the petitioners. NDC lead counsel, Tsatsu Tsikata was not in court yesterday as reports said he was out the country.

Ruling on Production & Inspection of Documents
When the case was called, Justice Atuguba said his colleague Sophia O. Adinyira was to read the unanimous opinion of the court on whether or not the court should order the EC to furnish the petitioners with Results Collation Forms from 275 Constituencies and Declaration Forms Pink Sheets from 26,002 polling stations.

Justice Adinyira said that before the petitioners filed the application, they (petitioners) had written to the 2nd respondent (EC) on 21st January for production and inspection of the documents but the EC had refused to produce the documents.

She said the petitioners had argued that the documents in the custody of the EC were public documents, and had insisted that once pleadings had not closed, they (petitioners) were entitled to them, adding that the petitioners used Article 21 of the Constitution to urge the court to order the EC to furnish them.

The court said that the EC had insisted that the documents being requested had already been given to all the parties that contested the 2012 general elections and that the petitioner's party, NPP, was also given copies.

Justice Adinyira said that even though the highest court of the land had not developed specific rules for such applications, it was relying on Order 21 Rule 8 (1) of C.I. 47 and Order 21 Rule 11 (1) of the same instrument.

“The documents being asked for production and inspection are public records in the official custody of the 2nd respondent and the petitioner's party and all others involved in the election of December 2012 were given copies.”

The court cited the Evidence Act, 1975 (NRCD 323) Section 1668 (8) to back its decision to refuse to order the EC to furnish the petitioners with the documents.

The court held that it was “unnecessary” for the petitioners to apply for the documents when they already had copies.

Justice Adinyira said that the petitioners could not raise any concern about the documents in their possession to warrant the court to take any action, saying the request is superfluous and unnecessary.

The court also said that the timing for the request was “premature” in view of the fact that court had given a ruling in respect of the application for further and better particulars.

The court held that even though the constitution enjoins the courts to protect the rights of all persons to information, the reliance on Article 21 (f) of the Constitution for the instant application is “rather lame.”

“That does not disclose any need for the court to ask the 2nd respondent to bring documents for inspection. A refusal would not infringe on the petitioners' rights.”

As a result, Justice Atuguba ordered that the motion for production and inspection of documents was dismissed.

Motion To Amend Petition
Afterwards, the court heard the application for leave to amend the amended petition filed by the petitioners.

Phillip Addison, counsel for the petitioners, told the court that at the last adjourned date, the 3rd respondent (NDC) had indicated to the court that it was going to raise an objection to the amendment which the court granted but added that “we still have not seen any affidavit in opposition filed.”

NDC Backtracks
Samuel Cudjoe, who stood in for Tsatsu Tsikata, counsel for the NDC, then told the court that “we decided not to file again”.

Justice Paul Baffoe-Bonnie then asked counsel whether the NDC was no longer opposing the petitioner's application, to which counsel replied, “We will abide by whatever decision the court takes.”

Justice Sulley N. Gbadegbe then cut in to say that the court's decisions were binding and the NDC needed to make up its mind whether to oppose or support the application, to which Mr. Cudjoe again said “We no longer oppose the application.”

Tony Lithur, counsel for the 1st respondent (President Mahama) also said his client does not intend to oppose the petitioners application to amend the petition.

Addison Moves Motion To Amend Petition
Mr. Addison then moved the motion where he made corrections to typographical errors, added, amended and substituted certain paragraphs.

He said the application to amend the petition had become necessary due to the discovery of instances of “irregularities and malpractices” in the elections.

Counsel informed the court that the number of polling stations affected by instances of irregularities and malpractices were increasing from 4,709 to 11,916.

He said the petitioners were ready to supply 'further and better particulars' to the respondents with respect to the additional polling stations that did not form part of the 4,709 earlier granted by the court.

EC Opposes Amended Petition
JamesQuarshie-Idun, counsel for the EC opposed the petitioner's application, saying that they (petitioners) should have filed a proposed amendment to the particulars.

He said it was due to the fact that an applicant's motion for 'further and better particulars' could be different from another's that they were opposing the petitioner's application.

He said once the petitioner's had raised allegation of voting in 28 polling stations which were not part of the 26,002 supervised by the EC, it was for them to show to the court how they came about it, adding that what the petitioners had filed “does not meet the order for 'further and better particulars.'”

Mr. Quarshie-Idun said that “we are entitled to know the ones that were supposed to answer.”

Court Rules On Amendment
After a break, the court unanimously granted the petitioners application to amend the petition and asked that the petitioners should serve the respondents with 'further and better particulars' of the polling stations that were added to the petition.

The court said the petitioners have two days from the day of the ruling to file the amendment and the respondents have seven days to file their answers to the amendment.

Mr. Cudjoe said, “We have seen the ruling together with the orders asking the petitioners to furnish the respondents with 'further and better particulars' but it is still important we move our motion.”

He said that if they (NDC) did not move their motion and the court made some decisions it could affect their rights adding, “We want an independent order from the earlier order.”

NDC Counsel Grilled
“We want a separate order in order to preserve our rights,” he argued.

But when Justice Atuguba asked him whether he was aware of the existing orders of the court in respect of what they were seeking, counsel said “the consequences in not applying for the particulars will disable us from bringing further applications for particulars.”

Justice Anin-Yeboah then asked the NDC counsel to supply the court with authorities of what counsel was seeking to do since, according to the judge, “I have not come across this submission in any jurisdiction.”

Justice Gbadegbe said that Order I Rule 2 of the High Court Rules defeats the argument being made by Mr. Cudjoe.

The judge asked if the NDC was not in court at the instance of the 1st respondent (President Mahama) whom the court has already granted his application for 'further and better particulars' before adding that counsel needed to limit himself to the orders that was not given to the respondents.

Mr. Cudjoe told the court that the orders to the 1st and 2nd respondents were specific, adding that “so far as we have not been granted an express order, we will be restrained from future application.”

Justice Atuguba then asked the NDC counsel to proceed with his application as it relates with differences in particulars.

Mr. Cudjoe then said that they wanted 'further and better particulars' on how they were able to aver that the 1st respondent's (President Mahama) figures are far in excess.

Mr. Addison then cut in to say that all the particulars that the NDC was seeking had been dealt with by the court and that paragraph 23 of the petition answered the NDC's request.

Mr. Cudjoe replied that what paragraph 23 talked about were deductions and not excess votes.

Justice Gbadegbe said that everything that the NDC counsel was looking for was in the petition, adding, “We understand counsel's difficulty because the paragraphs have been mixed.”

Even when Justices Atuguba and Jones Doste sought to straighten things for the NDC counsel, he still insisted that “we are not withdrawing this application.”

Court Throws Out NDC
The court went ahead to unanimously dismiss the NDC's application for 'further and better particulars' when Justice Atuguba said “since Mr. Addison in effect has submitted that some aspects of the petition should be read together, the mischief read by the NDC counsel disappears.”

Mahama Withdraws Application
Tony Lithur was then to move the 1st respondent's application for interrogatories but he said “we have had a second thought.”

He said that because the petitioners had amended their petition to add more polling stations, they would withdraw and study the figures since they are at liberty to re-apply.

The court accepted counsel's submission and struck out the application with liberty to re-apply.

Emerging Issues
When the court was about to retire to chambers, Mr. Addison drew the justices' attention to the fact that the rules of the court are silent on what happens next after filing the amended statement.

He said “we want directions from the court” and Justice Gbadegbe asked the bar to “put your heads together.”

Justice Atuguba said that Rule 69 C 1 of C.I. 74 gives the court the power to start the trial 15 days after the respondents have filed their answers.

Mr. Lithur said that the court should take judicial notice of the fact that the numbers involved in the petition is huge and asked the court to give the parties convenient period within which to prepare for the trial.

The court then ordered the respondents to file the amended answers to the petition 14 days from service.

The parties are then expected to come to court for directions as to when full trial should commence.