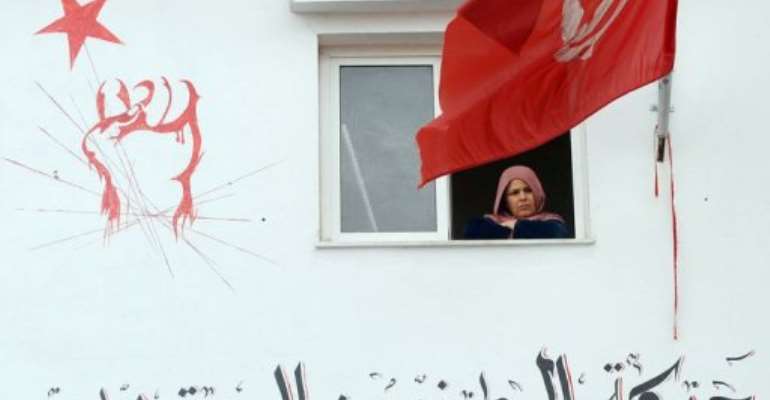 A Tunisian woman watches as mourners pour into Jebel Jelloud, a suburb of Tunis, on February 7, 2013. By Fethi Belaid (AFP)

TUNIS (AFP) - Tunis was at a near standstill Friday, with streets deserted, shops shut and public transport at a minimum as a general strike called by a powerful trade union after a leftist politician was murdered takes effect.

The Tunis-Carthage airport was open but many flights were cancelled, a Tunisair official told AFP.

A few buses and trams ran in the near-empty streets but there were few passengers.

The strike was called by the 500,000-strong General Union of Tunisian Workers to coincide with the funeral of Chokri Belaid, a lawyer and vocal critic of the ruling Ennahda party who was shot dead outside his home Wednesday by a lone gunman.

The assassination of the popular opposition leader sparked two days of clashes across the country between police and opposition supporters, leaving scores injured and a policeman dead.

Tens of thousands of people are expected to take to the streets for the burial of Belaid after weekly prayers in the Muslim country, whose long-established secular tradition has been countered by the rise of one of the region's most powerful Islamist parties.