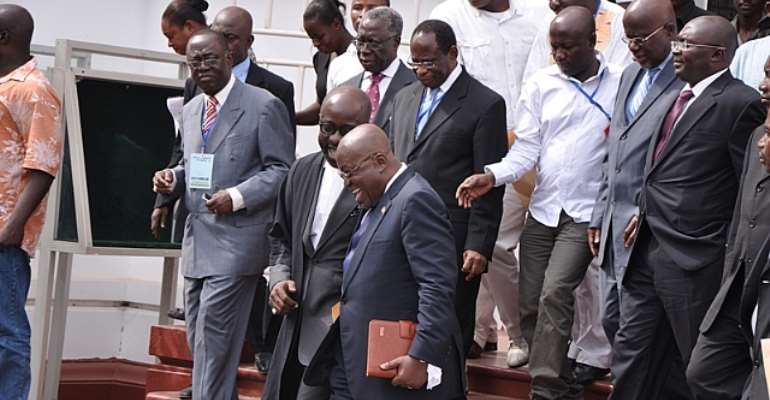 Accra, Feb. 5 GNA - The Supreme Court by unanimous decision on Tuesday ordered the petitioners in the December election petition to furnish the Electoral Commission (EC) and President Mahama with better particulars of claims with respect to the alleged electoral irregularities.

Two of the three respondents, President Mahama and the EC had filed separate applications praying the Supreme Court to order the petitioners to supply them with further and better particulars of the petition.

The respondents were seeking for "further and better particulars" with respect to the names and codes of the 4,709 polling stations, constituencies and regions where alleged electoral irregularities took place.

Other particulars include areas where voting took place without verification, where certain votes were said to have been annulled as well as areas where the presidents votes were alleged to been padded by the petitioners.

Mr Justice Sulley Gbadegbe, Justice of the Supreme Court who read the ruling on behalf of the nine-member panel headed Mr Justice William Atuguba, said it was proper that the respondents to the petitioners claim were made aware of the nature of the claims against them.

He said particulars being sought by the two respondents would also enable them to decide which response they have to provide to the petitioners.

In a related development the Supreme Court by a unanimous decision has also granted the application filed by the petitioners of the December election petition.

The court in its ruling granted petitioners all their reliefs and ordered the EC to provide  them with the total number of people registered abroad and the method in which these voters were registered.

Meanwhile Supreme Court has also rule to give petitioners the go ahead to amend its earlier petition with respect to the 4,709 polling stations alleged to contain irregularities to 11,000 polling stations.

Mr Tsatsu Tsikata, Counsel for the NDC, had earlier raised preliminary objection to the amendment on the grounds that the petitioners who filed the amendment on January 31st, 2013 at 9.20am in the morning cannot come back around 3.45pm when they are not satisfied with the process and at 3.50 bring another application without notifying the court about it.

He argued that the Supreme Court was seized with the rules of the current petition and that the petitioners should not allowed to dictate to the court as well as when they choose to file their amendment.

He said the court must own the petition process and not permit a party to determine who should file in the morning and when they are not satisfied come in the afternoon to change their mind without recourse to the court.

However, Mr Philip Addison, Counsel for the petitioners, said the petitioners filed the application on January 31st around 9.00am and amended on 3.50pm both on the same day.

He argued that at the time of filing the motion there were no respondents to the matter adding that the only difference between what was filed in the morning and revised was just the construction of the sentence but the facts were the same.

Citing various authorities to back his case, Mr Addison said there was no need to seek the leave of the court adding that the objection of Mr Tsikata was just to abuse the process and that the preliminary objection should be dismissed.

Besides, the Supreme Court  on Thursday February 7, 2013 give rulings on two motions, application for further and betters particulars by the NDC as well as the motion to produce documents for inspection.