GMSA worried over denial of Muslim students to worship in SHS 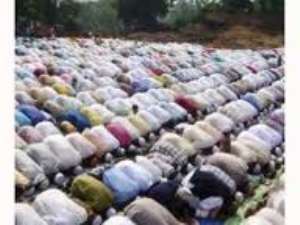 Accra, Feb. 6, GNA - The Ghana Muslim Students' Association (GMSA) has expressed concern over the refusal of school authorities in some Christian Senior High Schools (SHS) to allow Muslim students to observe prayers on campus, but rather compel such students to attend church services.

A statement issued by Mr. Abdul Nasser Salifu, Public Relations Officer (PRO) of GMSA and copied to the Ghana News Agency on Tuesday said a nationwide visit to second-cycle schools last year by the national executives of the Association to enable them have firsthand information on the situation revealed that some authorities appeared to compel Muslim students to observe church services against the students' doctrine.

Mr. Salifu also said most schools refused to allocate a place of worship for Muslim students, compelling the students to observe their five daily prayers in open spaces that were not hygienic.

According to Mr. Salifu these schools refused to demarcate space for Muslim students to pray  or give them the opportunity to pray even when the prayer time did not conflict with the school's academic programme.

He said on June 25, 2012, in one of the schools visited a student was punished by a teacher for not  being able to respond to the teacher's call because he was praying.

He said the situation was very disturbing and called on school authorities to respect the faith of  students belonging to other religions to guarantee national peace and cohesion.

Mr Salifu also cited instances where students were punished or subjected to abusive language for holding Islamic materials , and said this was uncalled for and must be condemned in no uncertain terms.

He added that Ghana was a peaceful nation governed by the rule of law, and that should not be compromised.

Mr Salifu called on Muslim and Christian leaders to dialogue on the issue in order to find lasting solution to it once and for all.

He appealed to President John Dramani Mahama to intervene to allow Muslims in SHS to practice their religion without intimidation or harassment, saying the constitution allows freedom of worship by all manner of persons and this must be upheld.