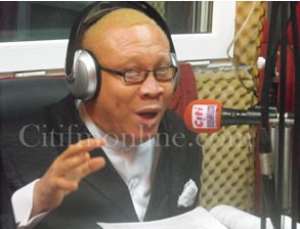 If there is one place in the world where controversy never dies in politics then it's Ghana. There is always something controversial, compelling enough to get a sharp commentary or rebuttal. As Woyome, the death of Prof. Mills, the sexual orientation of the VEEP, the stolen elections became less in their controversial value, interest and proclivity as interesting topics, most Ghanaians looked to the ruling party to inject our politics with another dose of controversy and they didn't fail.

The president in his benevolence gave the controversy hungry Ghanaian media and people two matters of great controversy to feed on, Nana Oye Lithur, the inconsistent so called human rights activist who pledges to defend any law so long as it's in the statutes no matter what human rights it violates,as Minister designate for Gender,Children and Social Protection and then Dr. Danaa as Chieftaincy and Traditional Affairs Minister designate.

The appointment of Dr. Seidu Danaa as Minister for Chieftaincy and Traditional Affairs is interesting for two reasons. First, the Minister Designate is blind and second, he is barred by that blindness, cultural-wise, from entering most places or even interacting with chiefs. The near 'cultural universal' in Ghana which makes it a taboo for any Chief to have any personal communication with a person who has any form of disability is not just a mere cultural theory but has indeed been enforced in very recent times.

As recent as 2011 for example, the Greater Accra branch of the Ghana Union of the blind through its president, Micheal Asante at a regional congress held in Ada, accused the Manhyia Palace of denying blind persons and other physically disabled persons from entering the palace.

This blatant act of discrimination rationalized on the basis of culture was defended by Manhyia through some of her officials, with some officials from the palace coming out to say that it was a culture they came to meet and were not prepared to abolish.

Already some Chiefs have registered their opposition to the nomination of Dr. Seidu Danaa who assessed on competency alone should be more than competent to handle the position as even those opposed to his nomination would admit but, who, like mentioned earlier, is barred through no fault of his by custom from interacting with Chiefs-a culture which is manifestly ridiculous and highly discriminatory.

Looking at the CV of Dr. Seidu Danaa he is equally qualified for several other Ministerial appointments. It beats my imagination why the president so bent on pushing the good Dr. to that particular sector without regards to the opposition from major stakeholders?.

It is likely and reasonable to assume that his appointment is just a cheap ploy to paint the president in a favorable light in the international community. I believe the President by his action expects the international community to hand him a plaque that reads 'HERE STANDS A PRESIDENT WHO AGAINST CULTURE AND TRADITION, APPOINTED A BLIND MAN TO THE POSITION OF MINISTER IN CHARGE OF CHIEFTAINCY AND TRADITIONAL AFFAIRS', he might even be knighted for it who knows? The President wants to ride on the disability of Dr. Danaa to international recognition, how cheap!

Even before that controversy died another one arose, the vetting o Ghana's most inconsistent lawyer now, Ms, Lithur who proved by her conduct before the appointment's committee, in my view, what a loser she has been all this while.

Her contradictory and sheepish answers to rather simple questions as well as her attempt to rationalize FGM, witches camp and her views on abortion betrayed the real Nana Oye and killed the Oye Lithur we thought we knew all this while.

But more absurd than the comedy that characterized the vetting of Ms. Lithur and her answers were the remarks by Moses Foh-Amoaaning concerning homosexuality.

The views of Lawyer Moses Foh-Amoaning could have passed without notice like the views of so many others but attention was drawn to his person, through no fault of his, Lawyer A Moaning is an Albino. Albinos suffer a lot of social prejudice in Africa.

The term used in Akan to refer to them has almost become derogatory. Several myths are held by society concerning albinos, a few being that their condition is the results of premature birth, they do not attend to nature's call on Friday and they do not die but rather vanish.

They also suffer a lot of other discrimination, with regards to employment, marriage and even natural rights like inheritance In some parts of the country. Many cultures in Ghana would find as abominable albinos being enstolled or enskinned as Chiefs- even when they are supposed to be the legitimate successors.

A few years back, GAPA, the Ghana Association of Persons with Albinism, organized a press conference over some of the discriminatory practices albinos were facing in the country, they cited in particular Bukuwara in the Eastern Region where Albinos were banished from the town.

People with albino like Lawyer Moses Foh-Amoaning struggle with the daily misconceptions, myths and social prejudice against their condition. He, like the many other albinos, struggles to tell the world of culture around him that his condition is normal and nothing unusual or spiritual.

Now for someone like Mr Moses Foh-Amoaning to turn around and blame spiritualism for the cause of homosexuality was very interesting. One would have thought that being a victim of baseless uninformed, negative superstition Mr. Amoaning would have been more rational with his disagreement rather than superstition.

He cannot denounce the claim that his condition was not caused by spirits but rather genes, and have homosexuals not take cover under that same right to claim genes and not spirits as the cause of their homosexuals.

His position which has no scientific basis is no different from the position others hold of him and his colleagues that their condition is caused by spiritual forces and as such they have magical powers which can be activated upon their murder for ritual purposes. I do not want to think that Lawyer Moses -Amoaning, learned and intelligent as he is, buys into that bosh.

Even though I disagree with the views of Ms. Lithur on homosexuality and her appointment in itself,agreeing the statement of the Moderator of the Presby Church that 'she is dishonest,lacks principles and has no integrity' and therefore should have been rejected, I find is amateurish in thought and reasoning the comments of Lawyer Moses -Amoaning on this whole gay saga.He should not lose sight of the Akan proverb 'While chewing the hands of an Ape….'