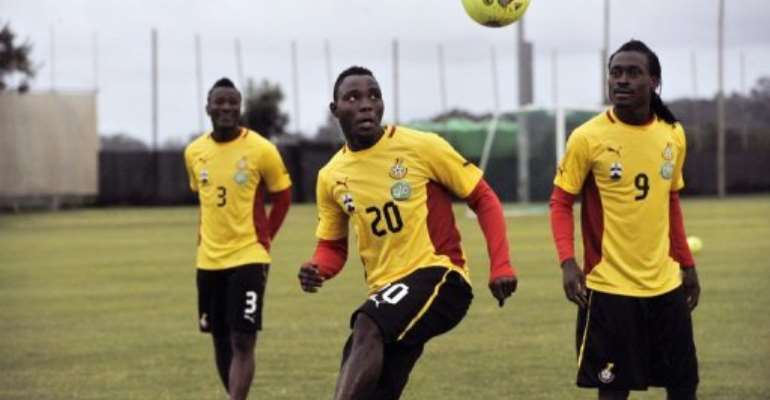 Ghana's Kwadwo Asamoah (C) pictured with teammates during a training session in Nelspruit on February 5, 2013. By Issouf Sanogo (AFP)

NELSPRUIT, South Africa (AFP) - Wednesday's Africa Cup of Nations semi-final may be a gimme for Ghana on paper, but this last-four clash is being played not on paper but on Nelspruit's heavily-criticised sandy pitch and that, Burkina Faso believe, puts them in the driving seat.

Four-time champions Ghana, odds-on with the bookmakers, secured their 12th semi-final ticket with a robust if not spectacular 2-0 defeat of debutants Cape Verde.

The Burkinabe, shorn of their injured scoring machine Alain Traore, eked out a 1-0 extra-time win over Togo for only their second appearance at this advanced stage of the continental showcase.

Perhaps crucially, Paul Put's band of over-achievers have played all their four matches at the Mbombela Stadium.

The threadbare playing surface more resembles a children's play-pit than the venue for a match of this stature after a fungal infection triggered by heavy rainfall destroyed swathes of grass.

And Put feels his team will have a crucial advantage over Ghana, who have played all their games up to now on the pristine grass of Port Elizabeth's Nelson Mandela Bay Stadium.

"It's very difficult because you need one or two controls before you can play the ball, while on the training ground it's only one touch.

"So I told the players to be patient and stay well organised because with this pitch you never know." he told the BBC.

As Ivory Coast discovered to their cost against Nigeria in Rustenburg on Sunday, this competition is no respecter of the traditional African football hierarchy.

So despite Ghana coming in a massive 66 rungs above Burkina Faso in FIFA's world rankings, only a fool would rule out the Stallions' chances.

"What I know is that we will play with confidence," Put ventured.

"Nelspruit is our ground. Ghana are a great team, but we've already come up against Nigeria and Zambia (both matches ending in stalemate). You never know."

Ghana are slowly coming to the boil after a laboured opening draw with DR Congo, a 1-0 win over Mali, before turning in one of their best performances for some time in the 3-0 win over Niger.

The two sides have only crossed swords twice before in this competition, Ghana prevailing 2-1 in 2002 and 1-0 in 2010 in group games.

A tight game is in prospect, then, if history is anything to go by, especially with the Stallions' missing three-goal Traore.

But Rennes midfielder Jonathan Pitroipa manfully stepped in to Traore's shoes, heading in the winner against Togo in the 105th minute.

Burkina arrived in South Africa with the modest ambition of ending a winless Nations Cup run stretching back 17 games.

They broke that sorry sequence in style with their eye-catching 4-0 rout of Ethiopia in their second run-out.

Now the only thing standing between them and the final in Soweto's Soccer City stadium on Sunday is a Ghana side whose top performer over the past two weeks has arguably been their goalkeeper, Fatawu Dauda.

He pulled off first-class saves against Cape Verde to earn him the man of the match award, but hard-to-please Appiah believes he can improve.

"He has been doing well, but he still needs to do a lot more to remain as Ghana's number one. He must keep fighting."