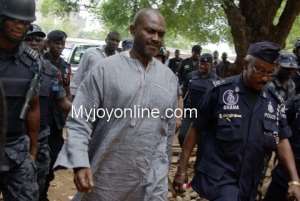 Dr.Sekou Nkrumah, son of Ghana's first president, says the New Patriotic Party (NPP) Member of Parliament for Assin Central is gradually bringing the name of the August House into disrepute.

He indicated that the conduct and utterances of Kennedy Agyepong in recent times is "unparliamentary" and “makes a mockery of Parliament”.

Sekou Nkrumah was reacting to a banter between the Assin Central MP and former MP for Asikuma-Odobeng–Brakwa, Paul Collins Appiah Ofori on an Accra based radio station, Okay FM.

Ken Agyepong had expressed his opposition to the NPP's decision to boycott the Appointment Committee of Parliament blaming his colleague MPs of allowing the party's National Executives to dictate to them.

But Appiah Ofori in an apparent response reprimanded him [Ken] and urged him to use the appropriate party channels to get his concerns addressed.

However, the belligerent Assin Central MP became offended used unprintable words to describe his party man and even threatened to beat him should he [PC] continue with the attacks on his person.

Commenting on the issue on Ekosii Sen programme Tuesday, Dr. Sekou Nkrumah could not fathom why Parliament has for long time tolerated the attitude of Ken Agyepong.

According to him, Parliament is supposed to be occupied by responsible and respectful individuals who have distinguished themselves and can serve as role models in society but not loose-cannons.

"I have heard him [Ken] a couple of times on radio and am surprised Parliament has not brought him to order because he does not represent Parliament well" he bemoaned.

Sekou Nkrumah said the conduct of the Assin Central MP is unacceptable and must be condemned by all including the leadership of the NPP.

"I don't think it is proper for someone in his [Ken Agyepong] position to speak the way he does; when you are in a responsible position you have to behave and speak well" he added.

The maverick politician believes it is about time the electorates look beyond money and consider the conduct of people before electing them to Parliament.

He intimated that the Ken Agyepong's unsavory reputation does not make Parliament attractive for people who have better expertise to accelerate the development of the country.

Sekou Nkrumah called on Parliament to institute sanctions to check people he described as habitual loose-talkers and recalcitrant MPs who lower the standards of the House.