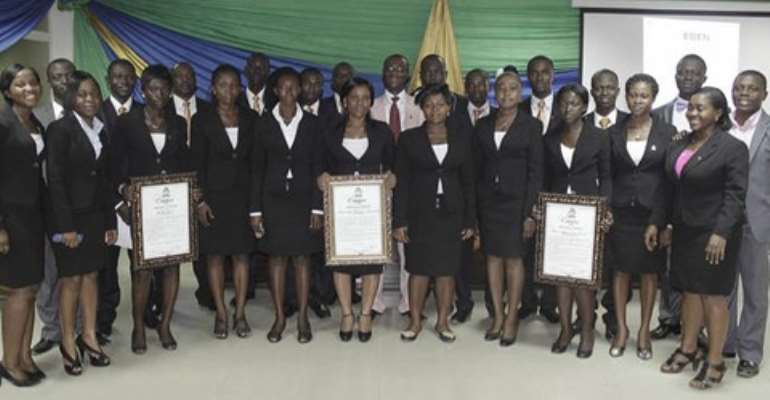 The awardees in a group pose

According to him, employers and managers who fail to reward staff stand to lose best hands that drive productivity and profitability.

He however says workers should perform optimally to reap from the success of their organizations.

Mr. Adom Boateng spoke to Luv Biz Report in Kumasi at the maiden “Eden Ayekoo Awards”, instituted by the Eden Group to award best performing staff of Eden Microfinance for 2012.

The awards scheme, he said, is to acknowledge and reward hard work, emphasizing that a business entity which refuses to honour its workforce is prone to experience low working morale and high attrition rate.

Twenty workers from all 19 branches of Eden across the country were awarded with full packages of MultiTv Digibox, other electronic gadgets, certificates and merit citations.

Chief Executive of Eden Microfinance, Asumadu Ntiamoah, was adjudged the Overall Best Worker for the Group.

Mr. Adom Boateng enjoined workers to strive for excellence, even in the face of challenges that threaten success.

He announced Eden Group will soon launch Television and Radio Stations to be operated from Kumasi.