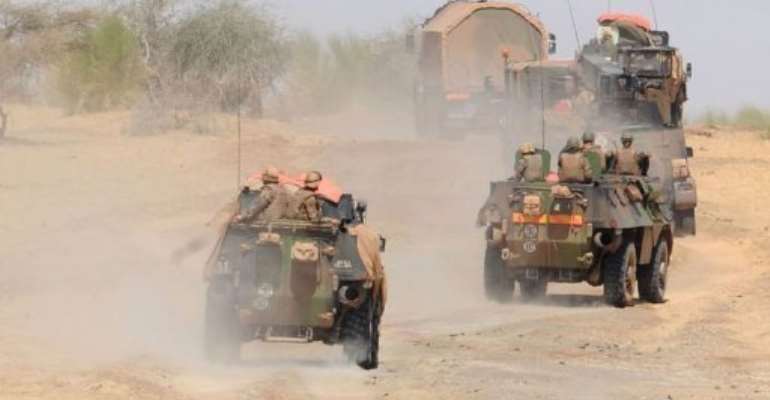 A convoy of French army vehicules patrol on February 4, 2013 between Timbuktu and Douentza. By Pascal Guyot (AFP)

BRUSSELS (AFP) - The UN, African Union and other global players meet in Brussels on Tuesday to seek ways of anchoring long-term peace and stability in Mali once the military drive to oust Islamist rebel forces is over.

Mali's Foreign Minister Tieman Coulibaly will lead a team from the beleaguered West African nation meeting 45-odd delegations from Africa and Europe at ministerial-level talks hosted by the European Union.

"We need to prepare the future," said a senior EU official ahead of the day-long meeting of the Mali "support and follow-up group" that kicks off at around 0930 GMT.

"When a state falls apart it takes time to put it together again, like Humpty Dumpty," said the source, speaking on condition of anonymity.

"It's going to take years to achieve the end outcome. But I hope it will only take months to achieve a secure enough environment."

At the top of the immediate political agenda will be the dispatch of human rights observers, amid fears of rights abuse and revenge killings, and the possible deployment of a UN force to keep the peace with African troops once French forces move out.

"There's a need for UN peacekeepers," said one EU diplomat. "It's obvious we won't simply see a miracle once the chase of the Islamists is over.

"The Malian army is incapable of reconquering the country, and there've been very few captures and arms seizures, yet the country must be secured and stabilised and the French don't want to stay for the long haul."

In Paris on Monday, US Vice President Joe Biden joined President Francois Hollande in calling for a UN mission to eventually take on the baton in Mali from an 8,000-strong African-led force, still in the making.

The Brussels talks will consider further support and training for the African force for Mali (AFISMA), as the 27-nation EU firms up a plan to send a 450-strong mission to train the poor nation's ramshackle army.

So far, 16 EU nations, plus Norway, have agreed to contribute troops to the EU Training Mission in Mali (EUTM), due to launch in Bamako on February 12, with training to start in April. But it still lacks sufficient numbers and medical back-up to kick off.

As the French-led campaign to evict Islamist fighters from northern Mali continues, the talks too will look at assisting the return to civilian rule by helping to organise elections that President Dioncounda Traore has vowed to hold by July 31.

"This is an ambitious timetable," said the senior EU official.

To ensure such pledges are held, the EU will dangle an offer to unlock 250 million euros (almost $340 million) of aid, frozen after the March coup.

"The resumption of aid will be progressive," said French Development Minister Pascal Canfin, who will attend the discussions.

"Funds for humanitarian aid and development will depend on the progress of the road-map," he said, referring to a post-war plan agreed by the Malian parliament last week to hold elections and kick off talks with some rebel groups.