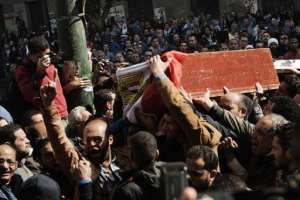 CAIRO (AFP) - An Egyptian minister resigned on Monday in protest at police abuse as demonstrators and riot police clashed in the Nile Delta after the funeral of an activist who died in custody, state media and witnesses said.

The activist, Mohammed al-Guindi, 28, had been arrested in Cairo's Tahrir Square last month after joining protests demanding change on the second anniversary of the country's uprising.

The opposition says Guindi's death proves the police have not reformed since the uprising, which broke out on January 25, 2011, a date which is marked as Police Day in Egypt.

The official MENA news agency said Arab tendered his resignation on Monday, without elaborating, while the state's Al-Ahram newspaper reported on its website that Arab resigned over the footage of police abusing the man.

Protesters, joined by residents of the Nile Delta city, then showered police with stones, witnesses said.

Guindi's lawyers say that after his arrest he was taken to a police camp in Al-Gabal al-Ahmar in Cairo where he was subjected to torture, before being sent several days later to the capital's Al-Helal hospital.

The Popular Current, to which Guindi belonged, said the activist died "as a result of torture."

Guindi's death and the footage of police abuse have confronted Islamist President Mohamed Morsi with uncomfortable parallels with Hosni Mubarak's regime, deposed in 2011 after the uprising, aimed at least in part against police abuses.

The presidency said in a Facebook statement that it had asked the public prosecutor to probe Guindi's death, stressing there is "no return to rights abuses of citizens and their freedoms... after the January 25 revolution."

The presidency had also said it deplored what it described as the "shocking footage" of police beating and dragging 50-year-old Hamada Saber during clashes outside the presidential palace on Friday.

The interior ministry has ordered an investigation into that incident, insisting it upholds human rights.

But images of Guindi's face bruised and battered on a hospital bed and the footage of Ahmed Saber's beating show how little has changed, according to rights groups.

In a report published on the anniversary of the uprising, the Egyptian Initiative for Personal Rights said police violence was still rampant.

"The Egyptian police continue to systematically deploy violence and torture, and at times even kill," EIPR said.

The group said it investigated dozens of cases of torture in recent months, noting "the consistent use of physical and psychological violence against detainees, which in many cases led to death."

Within hours of the news of Guindi's death, furious activists took to social networking sites condemning police brutality and calling for change.

Guindi "is not the first to die (of torture) under Morsi. But he is a political activist, that's why you know his name," tweeted Hossam Bahgat, EIPR's director.

"We will not get out of this cycle of violence except with the success of our revolution, which primarily called for the end of the police state and the oppression of the interior ministry," said Nirvana Shawky of the Egypt Freedom party.

Hundreds turned out in Tahrir Square for funeral prayers for Guindi and another activist who was shot and fatally wounded in protests on Friday, including Popular Current chief Hamdeen Sabbahi.

"Either we get justice for them, or we die like them," the mourners chanted.

Tributes have poured in for Guindi on Twitter and Facebook, with activists dubbing him the "new" Khaled Said, a man who was beaten to death by police in 2010 and who became a symbol of the fight against police brutality.

Let's Avoid Second Wave Of COVID-19 By Following All Protoco...
8 minutes ago