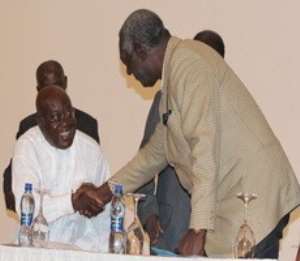 Mr. Rau said former President Kufuor and Nana Akufo-Addo were complicit in the murder of over 33 Ghanaians in Gambia in 2005.

Addressing a news conference in Accra on Monday, Mr. Rau said the erstwhile New Patriotic Party (NPP) administration led by President Kufuor and Nana Akufo-Addo as Foreign Affairs Minister did little role to uncover the truth behind the murder of the Ghanaians.

According to the Human Rights Activist the courts in Ghana are investigating the matter now. “The courts have also started their investigation telling me that they have also heard the same thing so now they are investigating Jammeh, Kufuor and Nana Addo. So please I am here today [Monday] to let Ghanaians know that if you are real and a good human rights activist you don't have to be afraid to bring a sitting president to court.”

He further stated that he has dragged the three to court because they failed to fight the cause of the Ghanaians who were troubled in Gambia. “It is possible that anyone who is a president can be dragged to court.”