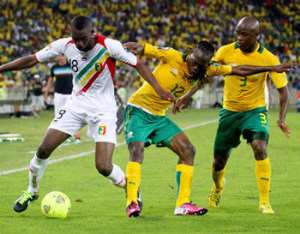 http://www.dailyguideghana.com/wp-content/uploads/2013/02/south_africa_mali.jpg THE ENTIRE South Africa, hosts of the 2013 AFCON, on Saturday evening went dead like a ghost city following the exit of the Bafana Bafana from the tournament.

The South Africans, who had been playing well in the tournament, met their waterloo in Mali who sent the AFCON hosts packing via the spot-kick after the two combatants had drawn 1-1 after extra time.

The unexpected defeat came as a bitter pill to swallow for the South Africans, especially the football lovers amongst them, as all activities in the country came to an abrupt halt.

For once, the Vuvuzela sounds and the blowing of car horns which dominated the nights after South African games since the AFCON started two weeks ago, were nowhere to be found.

The usual high turnout at the several decent pubs and drinking bars along the beaches of Port Elizabeth was not there.

DAILY GUIDE SPORTS gathered that the situation was even worse in known boisterous places in South Africa like Johannesburg, Pretoria and Cape Town among others.

South Africa hosted and won the 1996 Africa Cup of Nations and they were trying to replicate this in 2013, but their dreams were shattered after Mali defeated them on penalties in the quarter finals last Saturday.

Odododiodoo: ‘Impotent’ Police Cause Of Constant Clashes – ...
24 minutes ago